Aretha Franklin, the Queen of Soul and ‘greatest singer of all time,’ dies at 76

Aretha Franklin, the undisputed Queen of Soul, died Thursday at her Detroit home, the Associated Press reports, surrounded by family and friends. She had been battling various undisclosed illnesses for years, and, in recent weeks, was receiving hospice care. Franklin was 76.

As news of her declining health spread over the past few days, visitors including Stevie Wonder and the Rev. Jesse Jackson reportedly paid their respects at her bedside. Beyoncé and Jay-Z dedicated their Monday concert in the Motor City to Franklin. “We love you,” Beyoncé said, adding a word of thanks for “the beautiful music.”

Over the course of her nearly seven-decade career, Franklin established herself as one of the most important artists in music history, winning 18 Grammy Awards, selling more than 75 million records worldwide, becoming the first female performer to be inducted into the Rock and Roll Hall of Fame, and recording 112 charted singles on Billboard, thus setting the record for the most charted female artist in the trade magazine’s history.

Franklin’s other accolades during her lifetime included three American Music Awards, two MTV Video Music Awards, three NAACP Image Awards, one Golden Globe, a Presidential Medal of Freedom, a star on the Hollywood Walk of Fame, a Grammy Legend Award and Grammy Lifetime Achievement Award, a Kennedy Center Honor, being named 2008’s MusiCares Person of the Year, and honorary degrees from Harvard, Princeton, Yale, Brown, and the Berklee College of Music. She performed at Martin Luther King’s memorial service and at the inaugurations of three presidents: Jimmy Carter, Bill Clinton, and Barack Obama.

Aretha Franklin performs at the Elton John AIDS Foundation event in New York in November 2017. (Photo: Dimitrios Kambouris/AFP)
In 2010, Franklin’s commanding mezzo-soprano voice earned her the No. 1 spot on Rolling Stone’s list of the “100 Greatest Singers of All Time.” Contributing to that issue, admirer Mary J. Blige wrote, “You know a force from heaven. You know something that God made. And Aretha is a gift from God. When it comes to expressing yourself through song, there is no one who can touch her. She is the reason why women want to sing. Aretha has everything — the power, the technique. She is honest with everything she says.”

Franklin was born in Memphis on March 25, 1942. Her family moved to Detroit when she was 5 years old, and her mother, Barbara, died shortly before Franklin’s 10th birthday. Her father, Clarence LaVaughn “C. L.” Franklin, was a famous preacher at Detroit’s New Bethel Baptist Church, and his home was subsequently frequented by celebrity guests like Martin Luther King Jr., Jackie Wilson, Sam Cooke, and Mahalia Jackson, the latter of whom pitched in helping to raise Aretha and her siblings after Barbara’s death. It was around that time that a young Franklin began singing solos at New Bethel.

Franklin was a mother of two by the time she was 14 years old, giving birth to her first son, Clarence, when she was 12, and welcoming a second son, Edward, two years later. (She gave birth to two other sons, Teddy Richards and Kecalf Cunningham, in 1964 and 1970.) However, young motherhood did not stop Franklin from launching her professional career as a gospel singer at age 14. Managed by her father and signed to J.V.B. Records, she released her first album, Songs of Faith, in 1956. When she turned 18, she shifted to secular music, recording for Columbia Records and charting a few singles on the R&B and pop charts, but major mainstream success mostly eluded her.

She capped her amazing 1967 run with the September release of another signature song, her cover of Carole King and Gerry Goffin’s “(You Make Me Feel Like) A Natural Woman,” which became another Top 10 hit. By the following year, Franklin had won her first two Grammys and graced the cover of Time magazine.

Franklin continued to chart during the early ’70s with Spirit in the Dark, Young, Gifted and Black, and the double-platinum gospel LP Amazing Grace, the most successful album in her discography. Her career began to stall in the late ’70s, but she experienced an upswing after delivering an iconic performance in The Blues Brothers movie and leaving Atlantic to sign with Clive Davis’s Arista Records. She then made a successful crossover to MTV in the ’80s. Her 1985 album, Who’s Zoomin’ Who?, went platinum on the strength of the hits “Freeway of Love,” the Eurythmics collaboration “Sisters Are Doin’ It for Themselves,” and the title track; her 1986 duet with George Michael, “I Knew You Were Waiting for Me,” went to No. 1 in eight countries.

After keeping a lower chart profile in the early ’90s. Franklin experienced another career comeback in 1998 with the gold-selling A Rose Is Still a Rose (the title track of which was produced by Lauryn Hill) and with her spectacular “Nessun Dorma” performance at that year’s Grammy Awards, filling in at the last minute for the ailing Luciano Pavarotti; that performance is still widely considered to be one of the greatest Grammy moments of all time. Franklin also participated in the first VH1 Divas special that year.

Other historic TV performances Franklin delivered in more recent years included “The Star-Spangled Banner” with Aaron Neville and Dr. John at Super Bowl XL in 2006, “My Country ‘Tis of Thee” at President Barack Obama’s inauguration ceremony in 2009, a medley of Adele’s “Rolling in the Deep” and “Ain’t No Mountain High Enough” on The Late Show With David Letterman in 2014, and “(You Make Me Feel Like) A Natural Woman,” for honoree Carole King, at the Kennedy Center Honors in 2015.

In 2010, Franklin canceled several concerts while recovering from an operation to remove a tumor. (Franklin denied reports that her “unspecified illness” was pancreatic cancer.) Over the years she returned to performing sporadically, but she still dropped out of many shows, including her birthday concert this year at the New Jersey Performing Arts Center and 2018 appearances at the New Orleans Jazz & Heritage Festival and Toronto Jazz Festival.

In February 2017, Franklin told Detroit TV station WDIV that she planned to make one more album, with several tracks produced by her old friend Stevie Wonder, before officially retiring to spend more time with her grandchildren — though she hoped to open a nightclub in Detroit where she could occasionally perform. That album has yet to materialize, though in November 2017 she released A Brand New Me, a collection of archival Atlantic Records vocal recordings set to new orchestral arrangements by the Royal Philharmonic Orchestra. (Another compilation from that era, The Atlantic Singles Collection 1967-1970, is due out Sept. 28.) 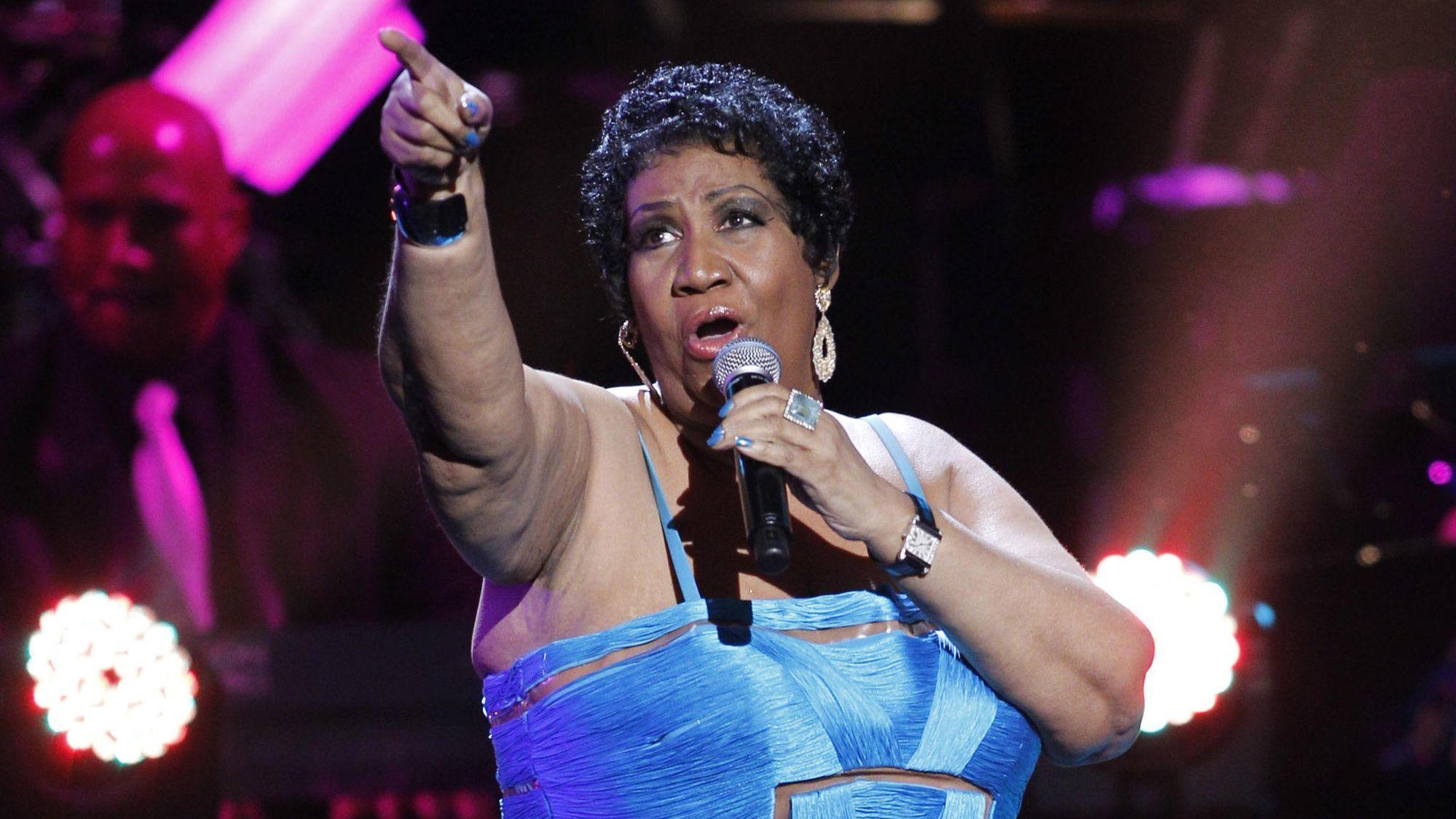 Franklin gave her final performance on Nov. 7, 2017, at Elton John’s 25th anniversary gala for the Elton John AIDS Foundation in New York City, at which John declared Franklin the “greatest singer of all time.” However, Franklin’s last public concert took place several months earlier, on Aug. 26, at the Mann Center in Philadelphia. A review of that show in the Philadelphia Inquirer said, “Regardless of advancing years and medical setbacks, Franklin seemed largely undiminished in voice or spirit, even if her exclamations sometimes soared past the limits of her breath. … The extended coda of ‘(You Make Me Feel Like) a Natural Woman’ was a showstopper, reminding the enthralled audience that even if she couldn’t quite ascend to the heights of her younger days, Franklin had a gift that was more about wringing profound emotion from a lyric than about vocal gymnastics.” 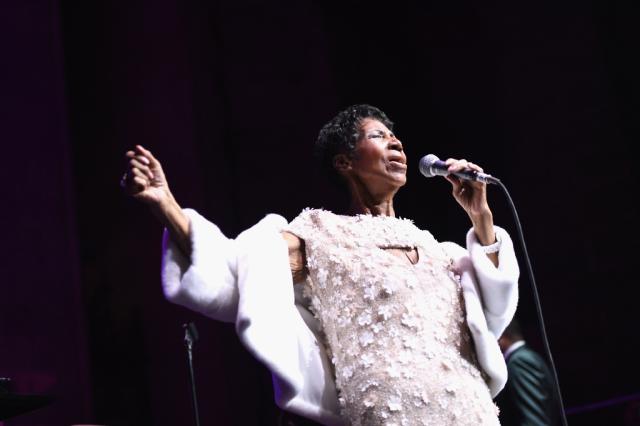 Still, perhaps it was Barack Obama who summed up Franklin’s legacy best, when he beautifully stated in an email to The New Yorker in 2016: “Nobody embodies more fully the connection between the African-American spiritual, the blues, R. & B., rock and roll — the way that hardship and sorrow were transformed into something full of beauty and vitality and hope. American history wells up when Aretha sings. That’s why, when she sits down at a piano and sings ‘A Natural Woman,’ she can move me to tears. … because it captures the fullness of the American experience, the view from the bottom as well as the top, the good and the bad, and the possibility of synthesis, reconciliation, transcendence.”