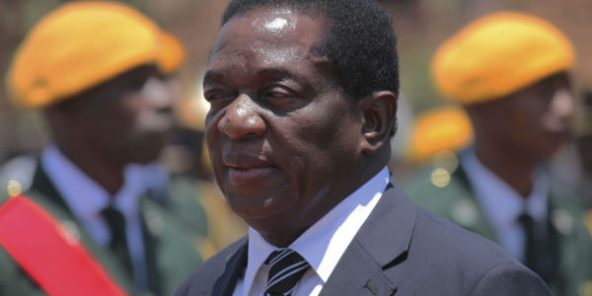 Robert Mugabe, Africa’s oldest president and one of the world’s longest-serving leaders, has said that he will only give up power “when God says ‘Come.’”

But it looks as though a military intervention, rather than a divine one, may be about to bring Mugabe’s 37-year stint in power to an end. And one man looks set to profit from the dramatic turn of events in Zimbabwe: Mugabe’s former deputy, Emmerson Mnangagwa.

The Zimbabwe military took control of the state broadcaster, Zimbabwe Broadcasting Corporation, early Wednesday and has reportedly detained prominent members of the ruling ZANU-PF party, though it insisted that the 93-year-old president and his family were “safe and sound.”

While much of the information coming out of the capital Harare remains unclear, there are unconfirmed reports that Mnangagwa may be behind the military takeover, which the army is insisting is not a coup.

1115_Mnangagwa Emmerson Mnangagwa is congratulated after being appointed as Zimbabwe’s vice-president by President Robert Mugabe (unseen), in Harare, Zimbabwe, on December 10, 2014. JEKESAI NJIKIZANA/AFP/Getty

Doug Coltart, a human rights lawyer based in Zimbabwe, says that the city is largely calm but that he is concerned by what could turn out to be an “unconstitutional transition of power.”

“Our biggest concern at this stage is there’s absolutely no guarantee that this type of transition will result in democratic consolidation on the other side of it. I think that there is a very real possibility that this could be just a consolidation of more of the same with a different face,” Coltart, 26, tells Newsweek.

Read more: Is this the beginning of the end for President Robert Mugabe?

Until last week, Mnangagwa was one of Mugabe’s closest allies. The 75-year-old is a veteran of the country’s independence war—which ended in 1980 with Mugabe coming to power—and has since then held a range of top political and military positions. Mnangagwa’s stature as a war veteran and his history in the military means he has developed a strong support base among the country’s armed forces.

Mnangagwa—who is known as the Crocodile in Zimbabwe—became Mugabe’s deputy in 2014 following the purge of Joice Mujuru, who Mugabe and his wife Grace accused of plotting to kill the president.

The move appeared to confirm Mnangagwa as Mugabe’s anointed successor, but in recent years, an intense rivalry has developed between the former vice-president and the first lady. ZANU-PF has split into factions—one, known as the Lacoste faction, backing Mnangagwa; the other, G40, supporting Grace Mugabe—and the first lady has called Mnangagwa out for allegedly undermining the president.

The final straw came over the weekend of November 4-5. Grace Mugabe was booed at a party rally in Bulawayo, allegedly by Mnangagwa supporters. The booing prompted a furious response from the president, who threatened to ax Mnangagwa. By November 6, Mnangagwa had been dismissed for “disloyalty, disrespect and deceitfulness.”

Mnangagwa reportedly fled the country but issued a statement vowing to “fight tooth and nail against those making a mockery of ZANU-PF founding principles, ethos and values.” The deposed vice-president made a plea for reconciliation within the ruling party and called for a “new and prosperous Zimbabwe” that does not “isolate itself from the rest of the world, because of one stubborn individual who believes he is entitled to rule this country until death.”

1004_Grace_Mugabe Zimbabwe President Robert Mugabe and his wife Grace Mugabe raise their fists in a vehicle before meeting delegates during a ZANU-PF youth rally at Rudhaka Stadium in Marondera, Zimbabwe, on June 2. JEKESAI NJIKIZANA/AFP/Getty

But while some in Zimbabwe are reportedly excited about a possible end to Mugabe’s time in office, Mnangagwa would not come to power with a clean slate. As a close ally of Mugabe for decades, Mnangagwa may find it difficult to avoid his reputation being tainted by association with a regime that has overseen the violent seizure of white-owned farms—a policy that resulted in crippling economic sanctions on Zimbabwe—and the degradation of an economy that has been so severe that Zimbabwe’s central bank began printing a pseudo-currency in 2016, which has no value outside the country.

In particular, Mnangagwa was minister of national security in the 1980s and is accused of playing a key role in the so-called Gukurahundi massacres, a brutal campaign against the Ndebele people in western Zimbabwe that saw more than 20,000 civilians killed by armed forces loyal to Mugabe. Mnangagwa has denied involvement in the massacres.

The former vice-president also oversaw Mugabe’s 2008 election campaign. The first round of the election produced a shock, with opposition leader Morgan Tsvangirai taking more of the votes than Mugabe but not an outright majority. A campaign of intimidation preceded the second round of voting—which saw more than 100 people killed and Tsvangirai pull out—in which Mugabe emerged victorious .

Coltart, the human rights lawyer, says that if Mnangagwa is behind the military action, it may not bode well for any attempt to establish democracy in Zimbabwe. “I think that a Mnangagwa presidency just by himself—a total capture of state by the Lacoste faction with the backing of the military—would not bring any meaningful transition in Zimbabwe,” he says.

This article was first written by Newsweek