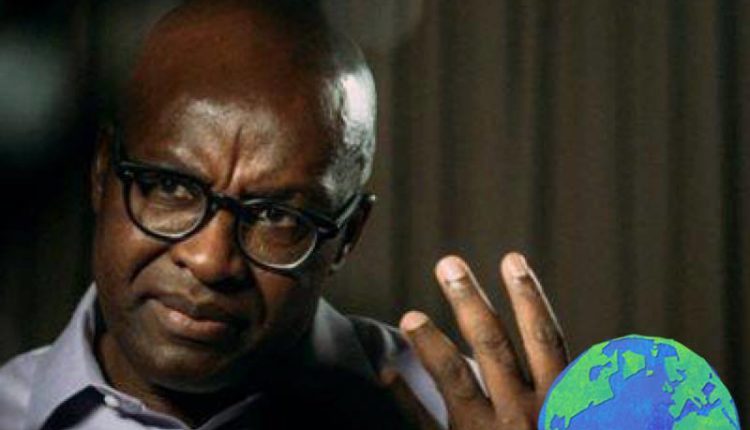 A German conservative politician has accused the historian and social scientist of antisemitism and demanded that an invitation for him to speak at a cultural festival in Germany be withdrawn.

This is an edited excerpt of an interview with Achille Mbembe conducted by culture journalist René Aguigah for Deutschlandradio Kultur.

René Aguigah: How would you describe your relationship with the Boycott, Divestment and Sanctions (BDS) movement?

Achille Mbembe: I bet those who accuse me are not even capable of pronouncing my name correctly and do not care anyway. Therefore this is not about me and I do not take any of this personally, in spite of the hate messages and racist insults I am now being exposed to.

Let me say this once and for all. It would never occur to me to contest Israel’s right to exist. This is something I believe in. Equally, I firmly believe in Palestinian equality and freedom. The truth is that although I am committed to Palestinian equality and freedom, I have no relationship whatsoever with BDS. I am a member of no political organisation whatsoever. I must firmly insist that this is my right and nobody will take it away from me.

As strange as it might sound, my core political beliefs come from a very deep conviction. I consider that  there are certain things human beings cannot do to other human beings. It is on this basis that I oppose antisemitism, all forms of racism and discrimination, as well as colonialism and other historical forms of dehumanisation.

The idea that I might harbour hatred and prejudice against any other human being, or any constituted state as such, is totally repugnant. The toxic spirit of our times is such that, if they were still alive today, Edward Said, Samir Amin, Stuart Hall and countless others could have easily been the recipients of the same frivolous and yet vicious propaganda I am being subjected to. The list is long of those who are frivolously accused of antisemitism and racism throughout the world. Unfortunately, as things go, many more will go through this ordeal. This is what must stop.

I fully understand why Germany cannot and should not tolerate antisemitism. Indeed, this should be the case everywhere else in the world. This global fight will succeed if, at its core, are the highest ethical and universal principles. I think the time is fast coming when we will have to ask why does Germany appear to have become a laboratory for a powerful offensive against certain traditions of critical thought and progressive politics? Why is this offensive taking as its prime targets the minority voices in Europe and voices of the formerly colonised worlds? Who gains the most if indeed these voices are reduced to silence?

The struggle against antisemitism should never be used as an alibi or a cover for a new brand of racism.  If and where it happens, this is what should courageously be called out by every person of goodwill. Once again, the global struggle against antisemitism, the resurgence of neo-Nazism and other forms of racism worldwide requires the utmost vigilance. I am afraid it will be fatally compromised if the unspeakable crime of the annihilation of the Jews at the heart of Europe is misused either for racist ends or to suppress the fragile voices which, throughout our world, are still striving for justice.

As far as I am concerned, I should reiterate my refusal to collaborate with institutions or individuals involved in human rights violations in the Israeli-occupied territories. This non-collaborative stance has nothing to do with antisemitism, unless the term is hollowed out of any moral meaning. Nor has it anything to do with the contestation of Israel’s right to exist.

Furthermore, a proper critique of colonialism and racism has nothing to do with the relativisation of the crime of the Holocaust. In fact, such a critique is a key element in the fight against antisemitism. Such a critique is also absolutely necessary for those who genuinely seek to understand how our modern world came to be, what it is today and how, together, we can repair it. This is, in any case, what my work has been about, as well as the kind of theoretical perspectives I identify myself with.

That voices and approaches such as these can come under frivolous and vicious attacks in Germany is the real question we must urgently address. What does this tell us about the inner state of this country? The question we need to ask is whether in the first half of the 21st century, Germany will be able to uphold three key principles of any liberal state: the freedom of conscience, the freedom of expression and academic freedom. None of these freedoms should be a casualty in the global struggle against antisemitism, neo-Nazism and racism. Ultimately, these principles are some of the most powerful weapons at our disposal if we are serious about repairing the world and opening it up to all who inhabit it.

Aguigah: Has there been support for a petition [calling for an academic boycott of Israel] signed 10 years ago?

Mbembe: This petition was not drafted by BDS, but by a wide group of respected South African scholars mindful of their own history of racial oppression and struggle, but also committed to the project of truth, forgiveness and reconciliation. This is indeed the ethical and moral framework from within which South Africa as a country engages with the rest of the world.

As far as I am concerned, to endorse a petition or not is entirely a matter of private conscience and belief. In South Africa, where I live, as well as in many parts of the world, endorsing a petition – any petition – was not a crime 10 years ago. Thank God, nor is it a crime today, so long as the petition does not call for violence or the overthrow of a foreign government and is not a platform for the propagation of hatred and prejudice. The right to petition the authorities, or to interpellate them, is a powerful form of peaceful free expression and a manifestation of the freedom of conscience. That all liberal societies should strive to safeguard this right is something we should all be fighting for. In South Africa, the right to protest peacefully is guaranteed by the Constitution. We are one of the protest capitals of the world, and almost each protest always ends with a memorandum or a petition that the authorities are requested to receive and respond to.

Aguigah: How would you describe the significance of the Holocaust in your life?

Mbembe: Facing the Holocaust, my attitude has always been one of silence, meditation and prayer. I came to this attitude as a result of my reading Emmanuel Levinas, Herman Cohen and, more importantly, Franz Rosenzweig’s Star of Redemption. It is in the depth of African and other forms of spirituality that I have been able to summon the courage to face the night that befell the world in places such as Auschwitz. Later, I also read WEB du Bois’ reflections after his trip to the Warsaw ghetto.

I also drew a lot from one of our greatest poets, Leopold Sedar Senghor. In his collection of poems Hosties noires, published in 1948, Senghor meditates on his personal experience during the shameful period of the World War II occupation of France. He himself spent 19 months in a Nazi internment camp for French colonial prisoners of war. This was at Frontstalag 230, also known as Camp de la Chauvinerie. This is where they kept some of the black African prisoners known as tirailleurs [riflemen], who came to the rescue of Europe at a time of darkness. It is a poetry which conveys an imperative sense of hope. Taken together, these are the texts that have helped me forge a personal attitude vis-à-vis the Holocaust.

Aguigah: Differently put: When they say Holocaust Relativieren [you are relativising the Holocaust], what do you reply?

Mbembe: Repugnant. Seldom in my life have I felt so violated. They did not see me. They have not read my work. They hardly care about voices such as mine, nor about where we come from and where we are going. They saw a “Negro”. They did not see a human being able to think by himself and to act according to his own moral conscience. So they quickly invented a mask. Now they are trying to make the world believe that, in truth, I am but a Negro, an antisemite of a Negro! Seldom have I felt so violated and so disrespected in my entire life.

Mbembe: I know of no sane human being who does not recognise that the project of annihilation of the Jews that was put to work in Germany represents something so unique and so astounding that it compromised not only the Germans, but humanity as a whole. This is what I was taught while growing up in the country [Cameroon] I was born into, which by the way was itself a former German colony where successive colonial governors, including Governor Jesko von Puttkamer, were responsible for a few atrocities.

Let me reiterate that “comparative studies of colonialism” is a vibrant subfield of modern history. So far in world academia, it hasn’t come to any reasonable mind to abolish it. As far as I know, it is different from Holocaust studies. As I said earlier, to study colonialism and its aftermath has nothing to do with denying or relativising the Holocaust. It is plain wrong, or simply ignorant, to make such an allegation.

Aguigah: Do you see a connection between criticism against the Israeli government on the one hand and accusations of antisemitism on the other?

Aguigah: Which of your works should your critics read?

Mbembe: Those who care should read all the work. Because of its fundamentally humanist inspiration and at times deeply spiritual and poetic tone, it will hopefully help them grow in wisdom and generosity. They will not find one single trace of hate or prejudice in my work. Rather, in it they will hear a voice which is open to the world and all who inhabit it, which is sensitive to human suffering and misery, and which assiduously testifies on behalf of the forces of life, hope and reconciliation.  This, should I add, is the gift the South African experience has given me. Trying to share it with the world at large and in my own words cannot, in any reasonable account, be conflated with antisemitism.