Cardinal Tumi has initiated a general conference of Anglophones

The initiative of Monsignor Tumi, beyond the sometimes exorbitant demands, is very salutary and deserves to be followed with interest. Those who delude themselves about the eradication of the secessionist movement by military means are mistakenly mistaken. A secessionist guerrilla is not intended to beat the army: it does not have the means.

Its purpose is to put the state on its knees by exhausting it, and that is what the English-speaking rebels do. Their action is done in scissors: on the one hand, it subjects the State to important defense, security and reconstruction burdens, exploding the budget devoted to it at the expense of other essential posts, such as health, education, infrastructure, etc.

– On the other hand, it reduces the sources of state revenue by destabilizing the economic networks. The English-speaking rebels thus wiped out trade flows in the North West and South West and with Nigeria, led the PAMOL to the cessation of activities, destabilized the functioning of the CDC, reduced the production of cocoa by 80% in Southwest, not to mention other activities.

The goal is to bleed the Public Treasury and drive the State to the operational impossibility of conducting its business properly, resulting in a significant slowdown, or even a abandonment of planned investments.

A secession therefore does not act like a lion that shreds the state with claws and fangs, but like a snake that injects venom into the body of the state and eats it from within.. 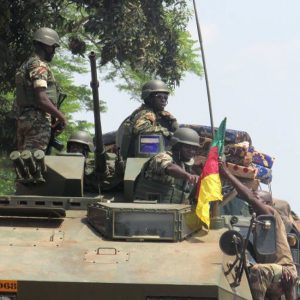 I said it again and again, there is no human way by which the unitary state of Cameroon can defeat the English Secession. No! It is ABSOLUTELY impossible: the State of Cameroon is much too small, far too underdeveloped, far too much in economic difficulty to militarily reduce a Secession representing 20% ​​of its population.

And those who hope or wait for the Secession to lay down their arms one day are childishly naive. A secession is a rebellion of a very particular type: it does not aim to conquer state power, but to leave a national community that it considers as occupying force. It is a state of mind that feeds on hatred and an endless spiral of provocation and repression. This is not a matter of a day and it takes at least 50 years, the time of two or three generations to hope for a change of mind of the rebel community.

People who started with bare hands, and were able to arm themselves can never get rid of their weapons. It is even nonsense to wait for individuals who feared the slightest decree of the smallest sub-prefect, but who eventually attacked the State and confine the administrative authorities in the big hypersecured cities, people who no longer fear to attack the procession of a Defense Minister accompanied by 6 Generals can lower the weapons.

In this story, it is not the Secessionists who suffer, but the people and especially the state. It is the state that is harassed at all times, it is its authority that is demolished, it is its power that is desecrated. Above all, there is doubt about his ability to assert his authority, which is gaining in strength: the dead cities imposed by the secessionists are applied to the letter, without the state being able to prevent them despite its efforts. On the other hand, those who dare openly display their support for the state are kidnapped and beaten, even executed.

The secessionists impose their order without the state being able to stop this infernal dynamic, and there is nothing to expect from them. Absolutely nothing: the day after the meeting of the English-speaking clergy who proposed this Conference, AYABA CHO made a statement largely relayed by the NET.

An extremely harsh and hateful statement, where he opened no prospect of negotiation other than the “independence” of their Ambazonia, threatening Anglophones who were not openly secessionist of traitors.

Do you see individuals of this nature lowering their arms? Especially that they have the wind in their sails and time with them? It’s pure joke!

This is known, we do not dialogue and we do not negotiate with a Secession. It can only be strangled by opposing a local enemy in the form of a regional state, which shrivels the Secession by a scissors effect:
-in the one hand, the Regional State reduces its attractiveness, because a large number of people are content with a federal autonomy. This gives them sufficient autonomy that dissuades them from the adventure of total independence. The Secession ceases to be fueled by discontent.
– On the other hand, the Regional State has, at least, the same legitimacy with the populations and the same knowledge of the terrain as the Secession. The local administration and police, which are accepted by the population and do not have the features of an occupying force like the National Army, more effectively combat the secessionist movement, with the federal forces supporting it.

Admittedly, the Federation says, it does not make disappear the secessions that are almost eternal, but it controls them and keeps them at a low level. In this regard, some mention Nigeria which is federal and nevertheless maintains the secessions: no one doubts. But if Nigeria were not federal, it would not exist at all! Its model makes it possible to subcontract the secessionist movements to the Regional States, the Federation supporting it..

Moreover, the unitary state does not prevent the secessions, otherwise that of Cameroon would have prevented the English secession. The present government amplifies them rather, with its claim to impose on the communities its bureaucratic and neocolonial vision of national unity. And everyone agrees that this desire to keep all the power and resources in Yaoundé, despite the 1996 Constitution that foresaw decentralization, is responsible for the depth of the crisis.

This crazy military equipment to impose the “unitary” order in the name of an ideological and non-pragmatic approach of the state will end badly and will fail anyway. The unitary state does not have the political, economic, financial or diplomatic means to militarily reduce the English secession.

We must take note and consider ways to get out at the earliest. The State must not exhaust the meager resources of the Nation for just this adventure, to the point where nothing else can be done. Cameroon might lose the CAN or get down to the salaries of public servants before understanding that we have gone astray?

The initiative of the English-speaking clergy can not be more salutary and opens an interesting perspective to get out of this molasses. If it can be surmised that such an initiative can not lead to resolutions advocating secession, one can nevertheless be sure that it will condemn the unitary state whose Anglophones no longer want.

We must therefore encourage it, even if we are not obliged to give in to all the prerequisites. Above all, we must open the door to a federal model as the maximum acceptable to the state. This will prevent the Conference from coming up with a pure and simple confederation, because unfortunately it is to this perspective that the blindness and arrogance of the regime has led us.

Above all, we must stop assimilating the unitary state unjustifiably to national unity. It is archival, it is counterproductive and it is belligerent. It is important that we integrate once and for all that in Cameroon, the unitary state is over.

It is the word “unitary” itself that is the source and fuel of war, after being the matrix of bad governance.

This word is the problem and this word must be banned from the Constitution and all the political vocabulary of Cameroon.