He told a huge crowd of Ambazonians this Friday September 2017, in his Batibo residence, the he will not step foot into the Yaounde foreign land, until further notice. He was speaking on the side-lines of the mass protest actions carried out across all counties of Southern Cameroons. 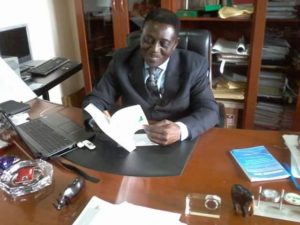 According to Hon. Mbah Ndam, staying with the people until everything is certain about their fate, is the right thing to do, rather than pursuing a blind course at a parliament whose outcomes are always known.

“This is the day, the lord has made. Southern has long been enslaved by Paul Biya. I’d told Biya that if Cameroon separates, he caused it. This is because we the Ambazonians have been pushed unto the wall, here’s the result. I was ready to join your protest if any soldier touched any of you. I will stay with my people until we see the light of day,” Hon. Mbah Ndam affirmed the jubilant population.

Speaking in his native Batibo mother tongue, the right honourable called on other Southern Cameroonians in La Republique’s parliament to resign and join the struggle to restore the statehood of Ambaland, before it is too late. He enjoined the population to continue trumpeting their voices until the last colonial master gives up and run away.

The resignation of Mbah Ndam comes on the heels of repeated calls from right activists of Southern Cameroons for the immediate resignation of all Southern Cameroonians serving in La Republique’s parliament. For it is a noble thing to do. It’s misleading for MPs from Anglophone Cameroon of English expression to be representatives in a foreign government that the people of SC are seeking to get rid of in order regain its sovereignty and statehood.

CPDM should be outlawed in SC by any practical means thereof, including the use of force; because it’s through this evil and corrupt political party, that the evil regime of LRC is able to channel and enforce its policies and illegal activities in SC. If SC hates LRC, there’s no reason to continue to keep and nature the political party of the evil and enemy regime of Mr. Biya. If the Biya regime and governance is so hated and no longer wanted in SC, then the CPDM party should be outlawed and cease to exist in all Anglophone territory. 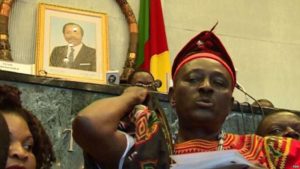 La Republique du Cameroun does not have much leverage on the merits of this political crises as a matter of fact, and they know it; except military threats and current illegal occupation of Southern Cameroon as has always been. This unholy alliance and illegal occupation of SC by LRC can suddenly come to an end once the MPs resign from that foreign parliament.

In the current struggle, the lingering question has always been, what are Anglophone lawmakers or MPs still doing in the LRC House of Parliament? They had their own House of Parliament and House of Chiefs. They abandoned it many years ago and joined LRC House of Parliament. If they want to leave, they are free to do so without further permission or any dialogue with Biya. The troubling situation is that, SC MPs have already been assimilated and consumed by the rotten culture of corruption in LRC; greed and politics of the stomach, which presents a serious roadblock to a smooth and successful transition towards the restoration and sovereignty and of SC statehood.

Desire for knowledge – Langaa and publishing in Africa