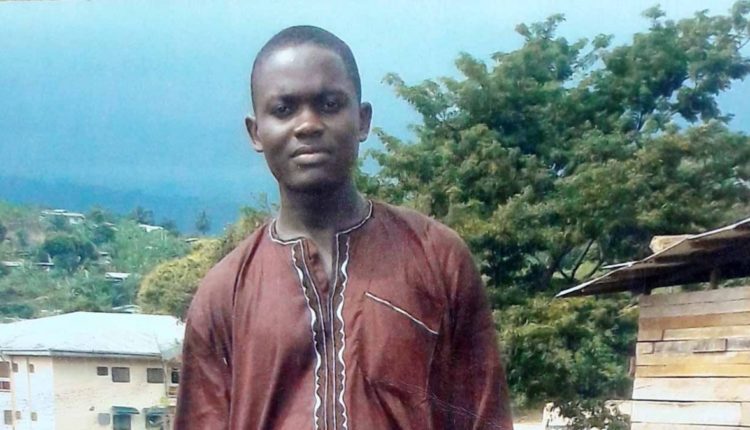 .But in four days, unless an earthquake occurs to stop the course of events, our children will go back to school and hopefully, throughout the national territory. Unfortunately, three of them will not be in their classroom to answer the first roll call, as it was already the case since last year. Not because they are bad pupils who enjoy playing truant, no! Not because they have been kept home by parents obeying a given call for strike or for ghost towns, but simply because they have been sentenced to 10 years imprisonment by the Military Tribunal!

Yes, LEVIS GOB AZAH, IVO FEH FOMUSOH and NIVELE NFOR AFUH will not be there on the 4th of September to answer the roll call when millions of other teenagers will be back to school to make appointment with their future. And yet, they are not unrepentant murderers! They are neither high-way robbers nor prolific bank safe burglars!

In December 2014, LEVIS GOB AZAH received an SMS that read as follows: “Boko Haram is recruiting young people aged 14 and above. Successful candidates should be holders of a GCE A level in four (04) subjects plus religion”. (I am the one translating. I did not get the authentic SMS in English). He forwarded the message to his friend IVO FEH FOMUSOH who in turn sent it to NIVELLE NFOR, student in the Government Bilingual High School of Deido in Douala. But unfortunately, the SMS was discovered by one of his teachers who had confiscated his telephone during his lesson. Without a qualm of conscience, the soulless teacher denounced the child to the police. It became then very easy to trace back to the two other young boys. All three were taken before the Military Tribunal, “judged” and sentenced to 10 years imprisonment for “failure to report terrorist acts”. We cannot understand why the police did not investigate back to the person who sent the SMS to LEVIS GOB AZAH! But, however, their lawyers filed an appeal against that unfair ruling, but since, the procedure does not seem to make progress and might even get stuck if people of good will do not come to their rescue to speed up their case.

It should be remembered that the role of a teacher is to educate the children entrusted to him and not to hand them over to the police when he is confronted with the first real education problem. By so doing, he behaves like that medical doctor who had been treating” only healthy people and when he received his first real patient, he rushed to drop him at the mortuary. Would he have behaved the same way if that student were his son or a close relation? Should the kids we teach not be considered and treated like our own children? I hope that with the latest development of events, that peculiar teacher is at peace with his conscience. I do not wish his own son to find himself one day in such a hair-raising situation. Does he at least know that the confidentiality of correspondence is ensured by the Universal Declaration of Human Rights as well as by the constitution of this country and that he was not therefore allowed to rummage about in the child’s telephone as to break into his privacy?

Did the judges in the Military Tribunal know that evidence extorted in violation of a constitutional provision is inadmissible before a court? Did they take time to investigate into the children’s past to find out if they had once have contacts with Boko Haram or if they had already committed acts likely to expose them as habitual offenders or dangerous persons close to toppling into Boko Haram’s hands or to committing criminal offences?

On what did the judges base their inner conviction so as to be so heavy-handed against simple-minded children who happened to have been playing with fire without thinking that they could be burnt?
Children are not adults with small size. They are children with a world of theirs. Here in the Southern regions, Boko Haram does not mean the same thing to children as to those of the Grand North who are daily confronted with exactions and atrocities of that monster and who witness the executions of parents, relatives, friends or mates of the same age groups. To the former, roadblockers (highways robbers) and Boko Haram are too abstract and distant realities to provoke in them the same terror and disgust.

These children who were so heavily sentenced are the same children who not so long ago were proudly wearing T-Shirts bearing the effigies of Ben Laden or Mollah Omar, even during sport sessions in school, and none of their so-called teachers bothered to tell them that those two individuals were terrorists or multi-headed hydras as presented in the mythology. Nobody ever taught them that they were bloodthirsty monsters one just did not have to associate with.

By sharing that SMS among them, those children, without any criminal ulterior motive, were playing the game the children of their age enjoy playing: mischievousness, impishness, schoolboy prank, bad joke! What I am saying is all the more plausible that none of them was able to meet Boko Haram’s recruitment requirements as mentioned in the SMS: none of them was holder of the GCE and more so, a GCE in four (04) subjects plus religion is not within the reach of just any student.

It is tantamount to getting the moon and is only possible for the talented tenth! In a country where getting employment for the youth is seemingly an impossible challenge, sharing the so-called Boko Haram SMS was nothing more than mischievousness or schoolboy pranks among naïve children. Sentencing these little kids to 10 years is out of all proportion! Drawing inspiration from what we see elsewhere like in France concerning the fight against terrorism, these children could have been released, put on “S” file and shadowed discreetly by intelligence officers. Too strictly applied, laws would become inflexible, judges would turn out to be robots deprived of conscience and the portrait of justice would be nothing less than a grotesque and revolting distortion of the truth. Good administration of justice must be fair and equitable.

Anyway, what does a barbaric and cabalistic expression such as “failure to report” actually mean for today’s and even yesterday’s abstracted school teenagers? Had they ever heard about it before in their short life? How many students even in the university have already heard about it? Is it taught in our schools that any child who receives such a message should quickly report to the police?

May we remind you that it is not the first time that Cameroonians have been arrested for “failure to report”? Some journalists have been arrested for the same charge, but have released because their past, their written works and all their actions revealed nothing that could to suspect them as enemies of the nation. If even the legal action against them has not yet been suspended, they are not in detention and they appear free. Why then this practice of double standard in the administration of justice? Why have the judges not been so lenient towards these children who are not old enough to vote but only to be sentenced to 10 years imprisonment? If they are not released, I am afraid that in this context of Anglophone crisis, Cameroonians would think this application of double standard justice was due to the fact that the first three appearing free are francophones and the three others heavy-handedly sentenced are Anglophones. It would be very difficult to prove the contrary and that would only worsen an already complicated situation!

They should be released and as soon as possible so as to resume classes in time. Today, we are leaving no stone unturned to convince parents in the North-West and in the South-West to let their children go back to school. This, because it is the matter of quantity, but we cannot pretend to be protecting the forest if we do not start by protecting the trees!
Let us not forget them. They are our children and whatever they have done, they remain our children. We are the ones responsible for their education. This situation calls primarily on teachers’ trade-unions, parents and parent teachers associations, religious denominations, political parties, civil society associations, human rights associations, journalists and all the people of good will. I count on you all to sign in the petition which has been opened on facebook for that purpose. If we do not assist them, nobody will and history will never forgive us. They are neither opinion leaders nor stars. They are anonymous children born by anonymous parents. Let us not forget them, let us save them, otherwise, they will die in jail!