In a strictly Anglo-Saxon style, denizens in the Northern Zone of the Federal Republic of Ambazonia, have forced down the throats of the Musonge Commission, lessons of the restoration of the statehood of former British Southern Cameroons. This came after Musonge in his opening statement said everyone should express themselves freely without being afraid of arrest.

The Commission for Bilingualism and Multiculturalism also known as the Musonge Commission, present in Bamenda, this Thursday May 31, 2018 to continue Paul Biya’s deceitful agenda over Ambazonian denizens, faced their Waterloo as everyone in the hall craved for the restoration of the pre-1961 statehood of the former British Southern Cameroons. Speakers after speakers decry the killings and said La Republique should let Southern Cameroons go since the government is adamant on Federation and it won’t work. 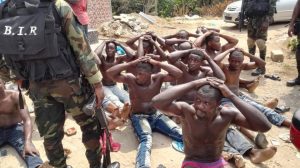 Premiering the rostrum, was the no-nonsense, Dr Nick Ngwanyam who told the agent provocateurs that “Anglophones” need peace and justice. Though he clamoured for Federalism, Dr Ngwanyam, said Ambazonians have suffered a lot and need a system where they can govern themselves peacefully. His utterances ignited fierce courage among the other Ambazonians present in the PC Ntamulong hall.

Honourable Jua, was even harder with more calls for La Republique du Cameroun (LRC), to understand that Ambazonians have vomited them. According to him, the 1961 union with Francophones was never build on a solid foundation. He added that Francophones should forget about the union and allow Anglophones live as a separate nation. Honourable Jua said no matter how Ambazonians lose their lives to this ongoing genocide perpetrated by LRC, she shall be free.

Karim Abdul who spoke on behalf of the Muslim community was ever harder.. He pointed out in clear terms that what is happening in Southern Cameroons is pure genocide as occupied government troops are looting, killing and causing mayhem. He emphasised that nobody in this hall can make dialogue possible and said if La Republique is seriouse those to dialogue with are in the jails, Sisiku Ayuk Julius Tabe and his Cabinet including the diaspora, a move that got him many applause in the hall.

IF ONLY I WAS 50-YEARS, I’D HAVE JOINED THE AMBAZONIA FORCES – FRU NDI

The last slice of the cake was cut by Ni John Fru who blatantly told everyone in the hall that if only he was 50 years younger, he would have joined the Ambazonian Restoration forces in the bushes. His utterances generated so much cheers in the hall. Fru Ndi said LRC has resolved to eliminate all Ambazonians and expropriate their land. He questioned why Paul Biya has been so heart hardened such that, he would find solace in the massacre of Ambazonians. He told them that Ambazonians are hated, killed and maimed for nothing.

Besides the aforementioned personalities, a couple of teachers, lawyers, politicians and Civil Society Organisations told the Musonge Commission to go back to Yaounde and tell Biya that Ambazonians are tired of the relationship with LRC and many are now advocating for the complete restoration of the 1961 British Southern Cameroons.

The dumbfounded Mosunge Commission, looked so worried, though promised to channel the people’s message to their slave master, Paul Biya.

The commission continues its work tomorrow with selected individuals.