Chronicles of the Anglophone Problem: Biya’s Emergency Humanitarian Assistance Plan Is the SCAM of the Century

They say that reality can sometimes be stranger than fiction. Take Biya’s so-called “Emergency Humanitarian Assistance Program” for the English-speaking Southern Cameroon, where tens of villages have been burnt to ashes, hundreds of people have been killed, and thousands more sent to refugees camps in Nigeria by… Paul Biya’s own army and its scorched-earth policy.

This Biya plan, which was announced with a straight face on June 20, 2018 by Prime Minister Philemon Yang, is so laughably preposterous it would not have been given a second thought had it not been issued by the government of a member country of the African Union and the United Nations. For starters, it is a plan for Anglophones but it is written in French. Biya and Yang have learnt nothing at all from the Anglophone crisis.

The Biya plan is scheduled to provide the amount of 13 billion CFA–which comes down to less than 10 dollars per person–to the thousands of internally displaced Southern Cameroonians, and the thousands of Southern Cameroonian refugees who have fled to Nigeria, as a result of being forcefully driven from their homes and villages by the order of the District officer of Manyu, Oum II Joseph, summary executions, torture, rape, terrorism, and fires set by pyromaniacs of the army Paul Biya.

These crimes against humanity have all been carried out in execution of the scorched earth “Operation Jackal” of Biya, Beti Assomo and the generals in Southern Cameroon. Some of the hundreds of homes and tens of villages reduced to ashes had inhabitants in them. Biya the pyromaniac is now playing firefighter!

Lire aussi:   A WONDERFUL LESSON, FOR KAMTO AND CAMEROUN

Biya thinks Anglophones are very stupid. His so-called humanitarian plan would be laughable if it were not issued by the French political establishment that lives in a cocoon, an echo chamber where they hear and repeat the same meaningless drivel and dishonesties spouted by their griot, CRTV.

The “Biyaist” newspaper, “L’Anecdote,” which has condemned Anglophones wholesale as terrorists and secessionists, published, without batting an eye, a front page headline that could have come straight out of the Nazi German and Pol Pot’s Communist propaganda workshops: “Biya’s Marshall Plan” for the Anglophone regions of Cameroon. This would be funny if it were not tragically ignorant. The Marshall Plan was an American plan for the reconstruction of Germany after the defeat of Hitler in World War II. Biya’s plan is a very bad parody of the Marshall plan. For starters, the Cameroon government has ignored the Anglophone problem, and opted to conquer Southern Cameroon militarily.

Biya’s war of conquest has gone very badly. He thinks he can buy Anglophones with what amounts to peanuts. Besides the deaths of hundreds of civilians, tens of soldiers, para-military gendarmes and police are killed every week in Southern Cameroon. The Prime Minister himself admitted that within a space of two weeks, more than 84 soldiers, gendarmes, police and prison guards were killed in Southern Cameroon in the first part of June 2018 alone.

Paul Biya’s Marshall Plan is a bankrupt man’s celebration of victory in the Anglophone war, before he has actually won. He is celebrating losing on the battle field. The Emergency Humanitarian Plan is a sham, a camouflage. It is a desperate attempt to find a way out of a war that Biya declared on the Anglophones without an exit strategy, a war that has become a quagmire.

Lire aussi:   Fred Muvuny: It’s high time for the West to reconsider its relationship with Biya 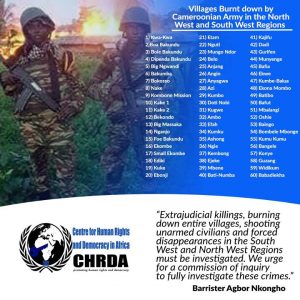 Biya knows full well that he cannot “reconstruct” a region that is still at war. He cannot proceed with reconstruction when has foreclosed all dialogue. He cannot proceed with reconstruction when his own parliament, the Cameroon National Assembly has refused to have a single debate on the Anglophone problem, while the parliaments of Nigeria, the United Kingdom, Germany, the United States, as well as UN agencies have held debates on the crisis. Biya cannot reconstruct Southern Cameroon with a pittance (13 billion amounts to peanuts) when Cameroon is virtually bankrupt–he is actually forcing all Anglophone government officials to contribute to the so-called “reconstruction.” Cameroon TV (CRTV) defaulted on payments to satellite TV distributor, ORTS for the 2018 World Cup. When the signal was cut off, CRTV just went ahead and pirated it, stole it. Where is the 13 billion CFA going to come from? They are counting on the UN to use its emergence funds to support this fraud. Of course Biya knows France and Switzerland will step up and bankroll this fraud. Will they really allow themselves to be hoodwinked?

In short, there is a virulent cancer on the Cameroon body-politic and Biya, with his characteristic lack of vision and megalomania, wants to cover it with a bandage, hoping against hope that he can muddle through and stay in power for life.

The fact is that the Biya Marshall Plan is a cruel hoax on the Anglophone people, and especially on Francophones who believe in their heart of hearts that this half-baked plan will stop the flow of coffins of dead soldiers and gendarmes from Ambazonia to la République du Cameroun. One thing is missing conspicuously from the Biya/Yang Plan…how is Biya going to resurrect all those innocent people killed by a country and an army that has never heard of the Universal Declaration of Human Rights?