POWER TO THE CPDM: OUR MARRIAGE REMAINS INDIVISIBLE

Fru Ndi’s SDF Party goes against its Motto to Organize Convention in Bamenda, amidst a Ghosted town.After failing to secure two neutral venues for is party’s convention in Bamenda, due to massive pressure from the people, the defiant Fru Ndi, who claims to be a fighter (unfortunately against his own people), finally secured the Bamenda Congress Hall for the event. The Secretariat of his perceived enemy party, the CPDM party, in a rescue mission provided the podium where Fru Ndi stood to castigate the very CPDM for political malfeasance.

Back into the convention hall, Cameroon News Agency (CNA) reports that, as the podium was sent for the convention speeches, the mayor of Bamenda II did not waste the opportunity of castigating the Yaoundé regime and calling for the release of Ambazonians kidnapped and illegally detained in Yaounde gulags. In the presence of the colonial governor, Adolphe LELE L’AFRIQUE, the Mayor, Balick Awah Fidelis, in a strongly worded speech demanded release of all Ambazonians arrested without further delay. The Mayor noted that this release will be a sign of good faith on the part of the colonial government that has promised security for its citizens. He also urged international observers present to take the plight of Southern Cameroonians to the internationally. 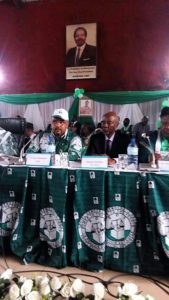 Taking the cue from Mayor Balick, the SDF Regional President, Hon Njong Evaristus, according to the CNA said Southern Cameroonians are frustrated with the colonial Biya regime because of its monumental failure and blatant refusal to listen to the voices of the crying people. To Hon Njong, it is time to flush out the New Deal government of Paul Biya for its failures to satisfy the needs and aspirations of the people in the Cameroons. The question however is, are Southern Cameroonians still fighting for regime change or freedom from colonial rule?

In his lengthy welcome address the, the self-acclaimed fighter and National Chairman of the SDF boasted that his party is the only to organize it’s Convention regularly and has succeeded in renewing the basic organs of the party both at the District and Regional levels even in challenging times like this with the Amba Revolution. He argued that, “It is only the SDF that can organize events in such circumstances. Bamenda is the democratic bedrock of Cameroon and in-spite the challenges.”

He officially announced his intention to retire from the colonial presidential race and leave the stage for the younger generation. It is however suspected that the chairman’s taste for political power has not been quenched entirely, as he may be re-elected for the position of chairman unopposed. This will be setting a new precedence in the party and party politics within the Cameroons, where a presidential candidate is different from the party chair. Such a scenario, as BaretaNews has learnt, is what prevails in the Nigerian political landscape.

Fru Ndi may have succeeded to hold his convention on the first day without any hitch. However, the people have sent him a clear message through the ghost towns and by compelling him to use the premises of his perceived enemy party the CPDM, for his own major party activity for the first time in 25 years. That is to tell him that, without the people he is nothing. Consequently, it’s either he and his party bigwigs humble themselves and succumb to the will of the Ambazonian people or they be swept away by the political revolutionary typhoon blowing across Ambazonia and the entire Cameroons.