Kidnap and Illegal Deportation of President Julius Ayuk-Tabe and Co; Femi Falana and others Nigerian Lawyers not Giving up yet. 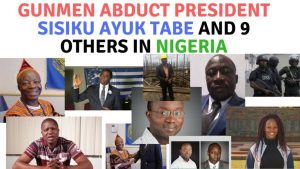 Under Nigerian jurisprudence is it possible for people to be held without access to a lawyer?
Femi Falana:Under section 35 of the Constitution and section 6 of the Administration of Criminal Justice Act the fundamental right of every suspect or detainee to access their lawyer is guaranteed. With respect to the Cameroonians all efforts made by their lawyers, doctors and family members to visit them in custody were frustrated. Even Mrs. Nalowa Bih who is pregnant was denied medical attention. But due to the intervention of the Minister of Foreign Affairs a representative of the Office of the United Nations Commissioner for Refugees in Nigeria was allowed to visit our clients before they were expelled from Nigeria. During the visit, the United Nations representative found that our clients were held in an underground cell at the headquarters of the Defence Intelligence Agency on the orders of the National Security Adviser.
From your findings who ordered the arrest?Some people say they were arrested and taken to Cameroon long before Nigerian authorities even got wind of it,is this plausible?
Femi Falana:When we were refused access to our clients by the National Security Adviser we filed an application at the Abuja Judicial Division of the Federal High Court on Thursday, January 25, 2018 for the purpose of securing their fundamental rights to personal liberty and freedom of movement. Barely 24 hours later, in utter disdain for due process the National Security Adviser deported our clients from Nigeria to Cameroon. Up till now, the National Security Adviser has not been called to justify his action since the country is run on the basis of official impunity. But as law abiding citizens we have challenged the illegal deportation and we have concluded arrangements to give our clients the best legal defence. We shall pursue the case until Nigeria returns to the community of civilized nations. The federal government has to be compelled to abandon its embrace of the rule of might.
By Olayinka Ajayi
Source: https://www.bareta.news/kidnap-illegal-deportation-president-julius-ayuk-tabe-co-nigerian-lawyers-not-giving-yet/
Continue Reading
Lire aussi:   Le Vice-président du MRC Mamadou MOTA « LA DICTATURE DE PAUL BIYA SERA BALAYÉE DANS LES PROCHAINS JOURS »
0 386
Share FacebookTwitterGoogle+ReddItWhatsAppPinterestCourriel