It is a pity that exponents of change and Cameroonian Union-Nationalists (civic-nationalists) who are committed to the founding of the “New Cameroon”, the almost 100-year-old Cameroonian dream, spend their time responding to the utterances of detractors from the lower rungs of the anachronistic French-imposed system. It is also a pity that some of our advocates of change even thrive on countering their utterances with utterances of their own that mirror the shallowness of their minds as progressive political beings.

The madness of Biya’s CPDM should be countered with advanced ideas and logical arguments that are devoid of tribal, ethnic, regional or linguistic blindness. That is our only bargain for the future “New Cameroon”. 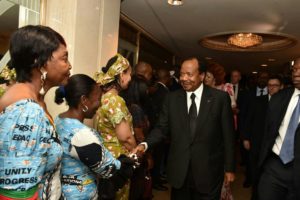 To further ridicule our intelligence, we have spoilers (confused and one-sided) who immediately excuse the ridiculous utterances of these pseudo-advocates of change who are cursed by a dogged sense of self-righteousness, and who in their twisted ways go about distorting the Cameroonian reality and history to suit their purposes, purposes that are not for the interest of those they purport to be for—the struggling, cheating and energetic Cameroonian masses.

Simply, I am tired of seeing our people reacting to distractions from the regime in power. It has been going on like this since 1992 when the exponents of change stopped being the pace setter in the struggle against the system. What is abhorable is the fact that while, before, Cameroonians had to deal with detractors at the top of the government, the exponents of change have been so weakened to the point that that they now find themselves responding even to nincompoops of detractors from the lowest ranks of the regime in power, and even from people with no progressive and inclusive thought formulations that profess to be in the opposition.
We can boast of setting the pace of the struggle to build a “New Cameroon” only when the regime in power and the system as a whole starts being the one responding to our ideas and actions. Moreover, that would require an effective organization and undivided ranks devoid of spoilers with self-centered personal, tribal, regional or linguistic agendas.