President Ayuk Julius Tabe Wife Makes First Statement: ” My husband Julius is not a terrorist. He is not a criminal. He is an activist fighting for freedom, equality and justice in the land of our birth Ambazonia”

President Ayuk Julius Tabe Wife Makes First Statement: ” My husband Julius is not a terrorist. He is not a criminal. He is an activist fighting for freedom, equality and justice in the land of our birth Ambazonia”.The wife of Sisiku Julius AyukTabe makes public statement for the very first time. Notice in the following statement that; contrary to the lies said by some persons, she had not talked to her husband since January 5, 2018. Be brave Amba First Lady!

Here is the statement in its entirety.
—–
Statement from the family of Sisiku Julius Ayuk Tabe

I need to start by thanking God for all good things come from Him, even difficult moments too.

With every passing day we are becoming more and more worried about the whereabouts of Sisiku Julius Ayuk Tabe. The last three weeks have been a nightmare, for all his family and friends and the people of former British territory Southern Cameroons (hereafter referred to Federal Republic of Ambazonia), not knowing where he is.

I issue this statement because we have reason to be worried for my husband’s life and safety and we know that the media, public, governments and organizations will pay attention.
Sisiku Julius Ayuk Tabe is a loving, caring, humble, and honest husband and father of my children. A trained and experienced computer engineer, he is calm and always desire to serve others and seek solutions toward improving human prosperity. These are the qualities that earned the confidence of Ambazonians who trusted him to lead legal and diplomatic efforts toward the independence restoration and international recognition of the Federal Republic of Ambazonia as a democratic and sovereign state. 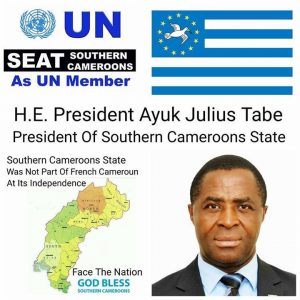 My husband Julius is not a terrorist. He is not a criminal. Julius is an activist fighting for freedom, equality and justice in the land of our birth Ambazonia.

Julius and I last discussed on 5th January 2018, when he flew to Abuja ahead of a scheduled meeting with close members of the Interim Government of the Federal Republic of Ambazonia. The meeting, he told me, was to focus on the rising humanitarian need of Ambazonia refugees in Nigeria and indiscriminate killing, arrest, and destruction of property and businesses of unarmed citizens in our homeland by armed soldiers and paramilitary forces of La Republique du Cameroun and appointed government officials of President Paul Biya regime in Yaounde.

In the evening of 5th January 2018, Julius had not returned home and was unreachable via phone. On the of 6th January 2018, after several inquiries and consultations, we received information that my husband Julius and eleven other leadership members of Ambazonia Interim Government were abducted by Nigerian Security Service during their meeting at Nera Hotel in Abuja. For three weeks, no single person, including Nigerian human rights lawyers Femi Falana and Abdul Oroh and family members of the abducted leaders including myself have neither seen nor heard from one of the abductees.

On 28th January 2018, the two lawyers defending my husband and 11 others issued a statement indicating that the Government of Nigeria extradited the 12 leaders to Cameroon. On 29 January 2018, Cameroon government spokesperson Issa Tchiroma Bakary announced to Cameroun’s public and international community that 47 abductees in Nigeria including my husband Sisiku Julius Ayuk Tabe are in Cameroun’s territory and under custody. Until the announcement, my children and I still had no information of Julius’ whereabouts. Today is 31 January 2018, we have no proof that Julius and the 11 others are alive. And if they are alive, what are the charges against them and why have they not been allowed to talk to their families and to access legal due process under international law? 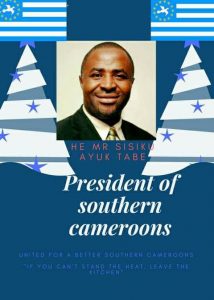 Hear my cry and that of my children. Hear the cry of thousands of spouses, children and family members of those who have been killed, injured, kidnapped, detained and are missing. We appeal to the international community and governments to urge Mr. Paul Biya to produce video footages of Julius Ayuk Tabe and 11 others, grant access to lawyers and family members to meet them, and free them because they are not criminals. Our appeal equally applies to all other activists illegally detained in prisons and unknown locations across Cameroun territory.

I call on fellow women, Amnesty International, the United Nations, Commonwealth, and African Union to act swiftly and decisively by offering to mediate on finding a political solution to the independence restoration struggle of Southern Cameroons.

Hear our voices. We are not terrorists. We are Ambazonians. We are fighting for freedom, sovereignty, and human dignity for millions of Southern Cameroonians. Our birth rights have been suppressed, our liberties erased, our political, cultural and economic freedoms denied for more than half a century by the Governments of La Republique du Cameroun.