Mugabe, who has ruled Zimbabwe for 37 years, looked confident and healthy in the images, taken during a meeting at the president’s state offices and residence in the capital, Harare, on Thursday afternoon. The defence minister and two South African envoys also appeared in the pictures.

One picture showed Mugabe, 93, and General Constantino Chiwenga smiling as they shook hands. No details of the conversations held during the meeting were released.

Mugabe has been confined by the army to his personal residence in Harare’s upscale neighbourhood of Borrowdale since Tuesday night, when troops moved to seize the state TV channel’s studios and other important sites.

Sources close to the military said Mugabe had described the takeover as illegal and was resisting pressure to resign. 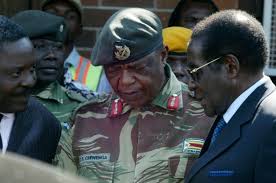 President Mugabe chats with ZDF Commander General Constantino Chiwenga at State House on 16 November 2017. Photograph: Zimpapers/Herald.He is thought to have rejected efforts by a Catholic priest – a long-term friend of his – to facilitate the mediation efforts.

The biggest regional power, South Africa, appears to have backed the army. South African envoys are in Harare to help with negotiations to form a new government and decide the terms of Mugabe’s resignation. South Africa called an emergency meeting of the Southern African Development Community regional bloc, which got under way in Botswana.

Though the military move has been cautiously welcomed by many Zimbabweans and the streets were once again quiet on Thursday, there are growing public demands for the senior military officers who led the takeover to lay out their plans.

The army declared on national television in the early hours of Wednesday morning that it had temporarily taken control of the country to “target criminals” around Mugabe, resolving a battle to succeed the president that had pitted his wife, Grace, against the former vice-president Emmerson Mnangagwa.

Mnangagwa was reported to have returned to Zimbabwe on Tuesday evening from South Africa, where he fled last week after being stripped of his office by the president in an apparent attempt to clear Grace Mugabe’s path to power.

Play Video 3:35
Robert Mugabe: the end of an era – video profile
Opposition officials told the Guardian they believed Mugabe would resign on Friday, allowing Mnangagwa to be appointed president, with Morgan Tsvangirai, the leader of the opposition Movement for Democratic Change (MDC) party, serving as prime minister in a transitional government that would have a three- to five-year term. The outgoing president and his family would be offered protection in his retirement, though Grace Mugabe is expected to leave Zimbabwe.

Members of the first lady’s G40 faction, who were detained during the military takeover, would be prosecuted in accordance with the law, the officials said.

Zimbabwe timeline: the week that led to Mugabe’s detention

There was no independent confirmation of the opposition claims, which one analyst described as “optimistic”, though it is clear negotiations are taking place between multiple political actors.

“The army want him to relinquish power but there are some sticking points,” said Knox Chitiyo, an expert in Zimbabwe at the Chatham House thinktank in London. “This is a complete shock to him. He did not see himself leaving office this way.”

The fragmented opposition has not publicly condemned the military move, but calls for a swift movement to democracy are growing.

The MDC was founded in 1999 and garnered most of its support among urban, educated and younger voters. It did well in elections in 2000 and 2002 but in 2008 a brutal campaign of intimidation and violence masterminded by Mnangagwa convinced leaders to withdraw from a second-round run-off. Splits and further violence have weakened the party in recent years.

Nelson Chamisa, the deputy head of the MDC, called for “peace, constitutionalism, democratisation, the rule of law and the sanctity of human life”. Tendai Biti, an opposition leader and former finance minister, called for a transitional authority to take over.

The MDC said on Thursday that the transition authority should be “made up of competent Zimbabweans whose mandate will be to put in place measures to turn around the economy”.

Profile
Who is Grace Mugabe and why is she controversial?

There are also growing concerns that the detention of ministers and officials arrested during the coup could be illegal.

“I’m no friend of these people. I detest them. But laws are there to protect all of us,” said one human rights activist in Harare, who requested anonymity.

The future of Grace Mugabe is a key element in the ongoing discussions between Robert Mugabe and the military. Singapore and Malaysia, where the Mugabes own property, are potential destinations if she is allowed to travel into exile.

Who is Emmerson Mnangagwa?

It has emerged that one motive for the military may have been knowledge of a plan orchestrated by Grace Mugabe and her supporters to have up to 40 senior officers and officials seen as backing Mnangagwa removed from their posts this week.

During his rule, Robert Mugabe ensured the continuing loyalty of the military by offering privileges and lucrative business opportunities to top soldiers. The transfer of these to the first lady and her faction would have been a bitter blow. One opposition official said negotiations had been ongoing for several months with “certain people within the army”.

Zimbabwe faces severe economic problems. It is struggling to pay for imports due to a shortage of dollars, which has also caused acute cash shortages. Restoring some measure of economic health will be a priority of any incoming administration.

Since you’re here …
… we have a small favour to ask. More people are reading the Guardian than ever but advertising revenues across the media are falling fast. And unlike many news organisations, we haven’t put up a paywall – we want to keep our journalism as open as we can. So you can see why we need to ask for your help. The Guardian’s independent, investigative journalism takes a lot of time, money and hard work to produce. But we do it because we believe our perspective matters – because it might well be your perspective, too.

I appreciate there not being a paywall: it is more democratic for the media to be available for all and not a commodity to be purchased by a few. I’m happy to make a contribution so others with less means still have access to information.
Thomasine F-R.
If everyone who reads our reporting, who likes it, helps fund it, our future would be much more secure. For as little as £1, you can support the Guardian – and it only takes a minute. Thank you.