In a post, Boris Berlolt (BB) warns col. DIDIER BADJECK, to be ready for more revelations if he makes any more damming statements against the Ewondo-beti born investigative journalist (BB).
“I’m waiting for your next text and believe me, my response will be non-proportional. I did not do anything to you. It was you who wanted to put you awkwardly on the stage”, BB told col. Madjeck.
This recent posts adds to the already bitter exchanges between the two that the colonel who only last week allegedly contacted Boris Betlolt to be working for him; yet the army officer denies ever being in contact with him, alafnet gathered.

“I just read your text and I notice that you are under tension. This is a good point that will favor you. But you requested that the journalists who accompanied you in the Far North tell us what they saw? The answer is simple:

According to your own soldiers, you do not know how to fire the machine gun 12.7. I did not say this, it was they who said it themselves. 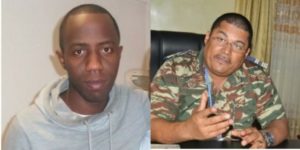 Your soldiers disrespect you (so no leadership) and everyone has seen it on your video.
You have a reputation to regularly deflate the expenses of journalists on missions and your collaborators. Those who are entitled to 200,000 Fcfa you give only 50,000 CFA or 100,000 CFA .

You spend your time mounting false reports to the hierarchy against those who prevent you from eating to hierarchy working for the Cameroonian army and the Minister of Defense.
The video that you wanted to use yourself for bragging (as you know how to do it in public) is looping on social networks. Even Nigerian sites are already making fun of you. We can see that while your fellow officers are retrained in the war front to die, you are in Yaoundé drinking hundreds of liters of beer in bakeries mvog-Mbi in military uniform. 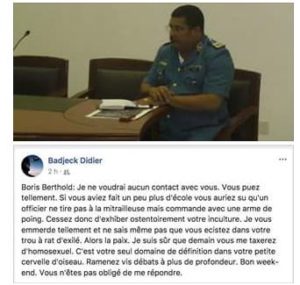 Paul Biya and the army officers have nothing to do with what has happened to you. They did not send you photos and videos. With “Senegalese riflemen” like you, Boko Haram would already occupied all of Cameroon and even you would have taken refuge in the UNHCR camps in Nigeria. So leave our valiant soldiers in peace. At least they know how to fire at the machine gun.
I’m waiting for your next text and believe me the response will be non-proportional. I did not do anything to you. It was you who wanted to put you awkwardly on the stage.BB wrote.
The Cameroonian army colonel who could not fire a machine is seen in the video below.