Fighting for Our Rights in Cameroon

Fighting for Our Rights in #Cameroon (Part 1)

On Monday, October 16th the Cameroon People’s Party issued a communique supporting the grand rally and march being held by the Social Democratic Front (SDF), another opposition party in #Cameroon. The SDF had duly declared its event and received an administrative receipt from the District Officer of Douala 1 Council as required by law.

Following the CPP declaration, sister parties from the #StandUpForCameroon platform also came on board to support and the entire platform issued a declaration. After this, several other parties and organizations came on board. The rally and march had as its objective “Solidarity with the North West and South West Regions”.
As more and more groups came on board, things got heated on social media. It was looking like this was going to be a tremendous event for #Cameroon and a wonderful step towards the Francophone regions showing support for the Anglophone regions. A wonderful step towards healing between the populations of our country.
As we sat in a planning meeting on Thursday, October 26th, the bombshell fell. The District Officer who had issued an official administrative receipt had rescinded. He was now cancelling the event for “potential threats to public order”. While we had hoped against hope, we were not surprised. 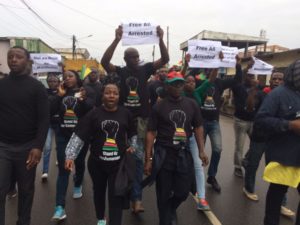 The Government of #Cameroon regularly refuses to let the opposition meet, even in small gatherings. In the last two years things have become nearly impossible with opposition parties, including the CPP, being arrested within their own headquarters as they hold meetings and party members water-hosed for trying to hold a press conference.
At the CPP, within minutes of the ban being issued, I heard murmurs, and someone say, “that’s it!” The hashtag #OnVaSaufQueMarcher was born. We immediately translated into #WeMustWaka.
We didn’t have to think about it. For the CPP allowing the Government to trample on our fundamental rights is a no go. We called round to party decision-makers to get official approval. Our stance was clear, we were going to march anyway.

We took this stance and met with our #StandUpForCameroon partners of UPC-Manidem and Manidem. We were aligned. As a group we met with the SDF Regional President who had initiated the rally and march, it was their call. They held the same view as us. If we let the administration trample once again on our rights as political parties, we may as well close shop and go home.

Saturday, October 21st was finally here. I woke up that morning, not in my own bed, of course. I had not slept at home for days. Cameroonian police are known for coming to pick leaders up from home and stop the protest before its starts. We were not going to let that happen. Kind friends had given me a wonderful bed to rest in. We were on. 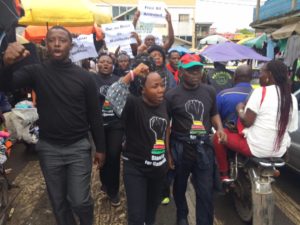 The first call to the team leader coordinating our lookouts told me things were worse than what we’d expected. Bepanda, the site of the protest was on complete lockdown. No cars or bikes allowed to enter. Water trucks and battalions stationed at every entrance.
We had expected this and had scouted a much wider area in which it might be able to hold the event. The police and gendarmes had gone even wider. From Bonaberi to Akwa, Dakar, Bonamoussadi, Bessengue, Douala streets were almost deserted on a Saturday, because police and gendarmes were everywhere. Riot gear, guns, mami-watas (water-hosing trucks) of all colors, armed and unarmed gendarmes, police in uniforms and in civilian, sitting in marked and unmarked cars. They now owned the town.
It was worse than we had expected, but we were ready. Our own scouts continued to tour the town, we had to find a spot where we could march. We knew we would confront police in only a few minutes after we started, but we had told the people #WeMustWaka, #OnVaSaufQueMarcher, waka we would.
I finally got the call. We had found a spot. Right in the belly of the beast, was a soft spot. I called Regional President Nintcheu to see if his team too was OK with the spot. He answered the call and told me, “I am at Douche Municipale. I’ve been surrounded”.

I headed to meet with President Ndema of the UPC-Manidem. Many people had not showed, due to the heavy armed forces presence in town. We had not been able to reach the SDF teams. You could touch and smell the fear. We were not the organizers, but had come in support. We would be showing with less than half of the number we had planned on and none of the members of the main organizer. The decision was quick and clear. We had told the people we were going to march, we must head to Bepanda. We must keep our word.
This is where the James Bond comes in. Lots of subterfuge and disguise to get us to the protest site, unseen. The only secret I can tell you, is that people took means of transport, that some of you would kill to have photos of…. We got there. We marched. We kept our word.

After about 20 minutes, the police stopped us. In minutes, a battalion in riot gear, two mami-watas and a host of varied starred commissioners were standing in front of us. They demanded we stand down. The power relationship was not remotely in our favor. We stood down.
They demanded President Ndema and I enter their cars. I demanded to go with one of my leaders. The three of us were carted off. Everyone thinks the fear is when you start to march, there is some then. Naturally. You overcome it and you move ahead. 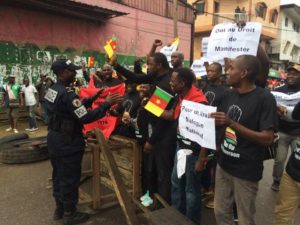 The real moment of fear is this one. When you are in their total control and you have absolutely no idea what they are going to do. For reasons we can only imagine: the bitter experience of the last weeks in the North West and South West, Biya returning to Cameroon on that day, the visit of the UN Secretary General on the 27th, fear- which we always forget is also ever present with them, whatever combination of reasons it was, they had decided to only assign us to our residences. No brutality, no arrests.
They took us home for President Ndema, party headquarters for me and instructed us to remain in that location until midnight. We dared to ask for a legal document authorizing this sequestration and received a scowl for response. The dozen police and gendarmes posted outside each of our homes sealed it. Thankfully our party members could come and go. Only we were restricted movement.
Midnight came. We had scored one against fear and for courage. Against oppression and for our rights, against the bloodshed and death inflicted in the North West and South West and for life.

We have no illusions. This was a small step that demanded giant courage. It is this seed of courage that we absolutely had to plant in the minds of Cameroonians.
Today we took an inch of Bepanda back, tomorrow we shall take our country back.