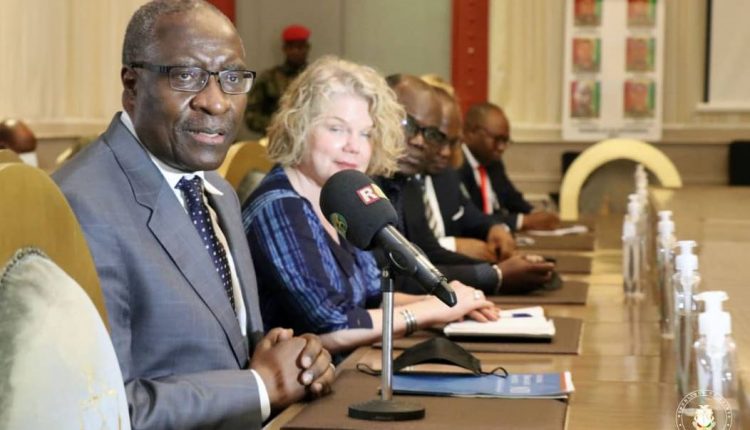 In an outing, the globally acclaimed good governance champion, highlights how his works at the Washington-based National Democratic Institute, NDI and TheFomunyohFoundation, have shaped Africa.

Internationally acclaimed good governance crusader, Dr Christopher Fomunyoh, has detailed the impact his over two and a half decades job as Senior Associate and Regional Director for Africa at the Washington-based National Democratic Institute, NDI, has created in advancing the democratic process in 30 countries on the African continent.
The widely celebrated international elections observer, made a retrospect of the road covered in impacting lives and communities through his works recently.

This was in an interview he granted Impact Voices, a social impact organisation managed by professionals from diverse backgrounds with a mission to connect the unconnected, impart knowledge and facilitate to unlock the potential of citizens for social development and innovation.

The organisation, it should be said, also empowers communities to reimagine the role of civil society,
economies and governance towards creating a more inclusive, resilient and sustainable world for all.
While explaining that impact to him is the ability to reach out, touch and improve lives; whether on an individual basis, within communities or the society as a whole or even at the national and international level, Dr Fomunyoh said he feels extremely satisfied and proud with the impact his works, through NDI and his private body, The Fomunyoh Foundation, have created.

The expert on democratisation said his over two and a half decades of work at NDI, points to a mark improvement on where the continent is at the moment in advancement of democracy

“When I started at NDI, there were only four African countries that were considered democratic in the sense of aligning for political parties to be created. These four countries were Senegal, Botswana, Mauritius and The Gambia,” he revealed.

Dr Fomunyoh, who is credited with designing and supervising country-specific democracy support programs with civic organisations, political parties and legislative bodies, said the situation has greatly improved at the moment.
“…when you look at Africa today, you can see that well over 12 countries are considered fully democratic and may be 18 or 19 others are considered partially democratic, ” he said.

“I am extremely proud of the fact that in these 30 countries that have made democratic progress in the past two and a half decades, the institute that I represent, NDI, has had a lot of engagements in these countries and has contributed positively to the changes that we see in these countries today, ” he stated.

Dr Fomunyoh said the NDI spent time, energy, resources and played a key role in the organisation of South Africa’s first democratic elections in the post-apartheid era . He recalled that this was thanks to a partnership with the late Archbishop Desmond Tutu. The partnership, he detailed, enabled NDI to jointly launch the “Project Votes” He said they also engaged with black communities across South Africa to help them engage on the electoral process after decades of the exclusion of black South Africans in the political processes of their country. “In the early 1990s, as apartheid was coming to an end, NDI went to South Africa, partnered with Archbishop Desmond Tutu, jointly launched the “Project Votes” to help them engage in the political process and that culminated in the first democratic elections in South Africa in 1994 that brought about a new democratic South Africa. You look at that, you feel confident that your
work is having impact, ” he said.

Getting Senegalese women into active politics

Dr Fomunyoh, who has organised and advised international election observer missions in many countries, said, he, through the NDI, played a key role from the early 2000s to engaging Senegalese women in active politics where they, like in many other African countries, had very low representation, especially in parliament. “…women now constitute about 48% of seats in the National Assembly of Senegal. When you look back, you think about the work that NDI did in Senegal in 2000, ” Dr Fomunyoh noted. He said the NDI made rounds and met with different political parties underscoring the need for them to be committed to nominating women to run for positions in their political parties by pledging to train the women to be excellent candidates and ensuring they win the polls. He said through their efforts,
Senegalese political parties signed a joint agreement, committing to partner with NDI to nominate at least
30% of women to run for local elections in the country. “They nominated over 8,000 women. NDI trained all the 8,000 women to run for elections across party lines and thousands of them got elected into local councils in Senegal in the year 2000. Today, it is those women who were elected at the local level who are now running for seats in parliament, ” Dr Fomunyoh explained. “When you go to Senegal today, they are very proud of the fact that closed to 48% of their representation in parliament is made up of women and they all say thanks to NDI’s work,” he said.

Hailed in Malawi for being inspiration to continent

Dr Fomunyoh said the NDI, through its works on the continent, was on the lips of all and sundry when he was invited by former Malawian President, Joyce Hilda Banda, during a huge women event to talk about inter-generational change and the linkages women leaders should have with younger generation women.“…everyone came to me and said you are just one of our brothers. Thank you for the work that you are doing to this continent and for being a source of inspiration to people,” he recounted.

Dr Fomunyoh also cited the over five-year partnership with YIAGA Africa, a Nigerian non-profit civic hub of change makers committed to the promotion of democratic governance, human rights and civic engagement; especially in monitoring of electoral process and advocating electoral reforms. “YIAGA Africa recently accomplished something that many Nigerians would not have expected which was to get an amendment to the constitution of Nigeria that would
reduce the age of access to elective office for young people under the campaign ‘Not too young to run’, ”
Dr Fomunyoh noted. He said the partnership with YIAGA Africa has permitted so many young people to be able to compete for several political offices because the age limitations have been reduced to accommodate them. He said NDI’s partnership with local organisations and democrats in different countries “have had a huge impact across the continent and I am extremely proud of that, ” he said.

The renowned rights defender said he has also impacted thousands of lives in different communities within and without Cameroon through The Fomunyoh Foundation. He said the foundation was created in1999 to raise civic awareness among citizens, carter for issues of human rights, good governance and to foster civic education within communities. “The foundation, over the years, has done a lot of humanitarian activities within our national borders as
well as even outside of our borders,” he sustained. He cited the foundation’s reach out during the 2021 Easter period in refugee camps in the Cross River State, Benue State, and even in the capital city of Abuja, Nigeria, doing food drives and food distribution to Cameroonians rendered as refugees by the ongoing “civil conflict” in the Northwest and South West regions. “That for me was very rewarding because you could look in their faces and see how much they appreciated the fact that I was able to come all the way from Washington…those are the kinds of things for me that show impact,” the celebrated indiscriminate philanthropist added.

He also recounted how in 2015, when the Boko Haram conflict was at its peak, he visited affected villages in the North and Far North regions of Cameroon and Nigeria to encourage and give hope to kids. “…the villagers came up to me to say ‘we are so thrilled that you could leave Washington and visit us…even our own sons and daughters have abandoned us ever since they heard about Boko Haram being in the region’, ” he said. Aside donating didactic materials to pupils and students of the areas, The Fomunyoh Foundation, he added, encouraged the learners not to“allow themselves to be influenced by Boko Haram militants”
.
Dr Fomunyoh added that the foundation also succored women in Tokombere and Makalangai in the Far North region, with sewing machines to empower and engage them in learning a trade to help sustain themselves and their families. “ …they are many ways in which I think the foundation has also tried to have impact at the local level within Cameroon. These are the kinds of things that are very uplifting and make you really feel proud, ” he stated.

Dr Fomunyoh seized the opportunity to call on all and sundry to “think big, reach out, don’t feel discouraged but feel inspired” by their dreams for it to come to pass.
“Reach out beyond yourself, beyond means and beyond the small confines of your village or your region of origin. See yourself as a leader of the world, reach out to other people and be able to raise them up. It is when you impact positively on the life of one, two individuals, one village, two villages, one region, two regions…that you really reassert yourself as a global leader, ” he advised.

Dr Fomunyoh urged contemporary youth to take advantage of today’s technology and impact across the globe; “irrespective of where you were born”.

“I was born in the North West region of Cameroon by poor parents who were farmers and here I am in Washington being able to impact development; not just in this city but also across our African continent. It makes me really proud, ” he said.