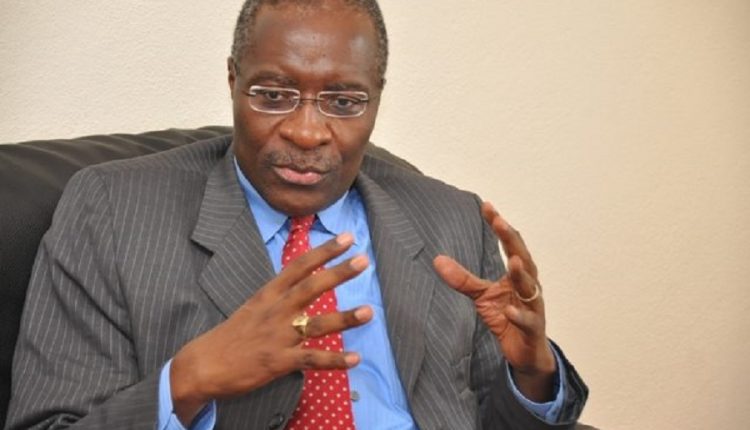 Dr Christopher Fomunyoh urges Biden administration to take urgent action on crisis in NW, SW.Also urges UN to send fact-finding mission to investigate growing atrocitiesinAnglophone regions . enowned expert in good governance and democracy, Dr Christopher Fomunyoh, has pressured the administration of US president, Joe Biden, and also the international community to take immediate actions to end the Anglophone crisis which has been ongoing for over four years. Dr Fomunyoh has also urged the United Nations to send a fact-finding mission to investigate atrocities committed in the North West and South West regions. The Regional Director for Central and West Africa at National Democratic Institute, NDI, was speaking to a group of experts, peace negotiators and security analysts during the Oxford University conference held virtually to seek ways to end the armed conflict in the two English-speaking regions of Cameroon.

Dr Fomunyoh, who is also Adjunct Professor at the African Centre for Strategic Studies, insisted that given the killings, destructions and atrocities committed by both parties in the conflict, the time was more than ripe for concerted efforts of the United Nations Security Council, the Biden administration and other world leaders to quit speech-making and take swift actions to end the “senseless war” in the two English-speaking regions.

In his presentation on the role of the United States, Dr Fomunyoh posited that the recent adoption of Resolution 684 by the US Senate is a positive indication towards the resolution of the crisis. Expressing his wish to see that the resolution is transformed from a bill to a legislature, he explained that the new US leadership has the enabling environment to transform the resolution to actions. “ …with regards to the Biden administration, I think it started up in the right place, ” Dr Fomunyoh told members of the committee, adding that President Joe Biden, in one of his first addresses, had expressly said he was going to work with the African Union and other regional organisations to make sure that the human rights of citizens are respected everywhere. He likened this to human rights violation in Cameroon. “If there is someone there who is conversant with the crisis who should take on that responsibility to make sure that everyone else is well informed and the international community can play its role in bringing an end to this crisis, it is Joe Biden. Joe Biden himself has a unique relationship with the US congress because he was a Senator prior to becoming President Barack Obama’s Vice President. While in the senate, he was a member of the Senate Foreign Relations Committee. He knows Africa well, he knows how to build alliances. Our hope is that he is going to build these alliances to make sure he can put his money where his mouth has been for the past three weeks, ” Fomunyoh articulated. The NDI senior associate advanced that: “Antony Blinken, in his confirmation hearing, made specific reference to the conflict in Cameroon as one of the priority areas of concern as the US Secretary of State.

And we hope that now that he has been confirmed, as he puts in place his team on Africa and on Cameroon, he will be able to make sure that this conflict is going to be a priority for the State Department… ” . He added that the Biden administration is made up of personalities who are “very conversant with the root causes of this crisis and the plight of the people of the North West and southwest regions and who, in their respective positions, should do everything in their power to make sure that the crisis can become their centre and that we can galvanize their support that is required to put an end to this hostility” . Fomunyoh cited the likes of the US Ambassador-designate to the United Nations, Ambassador Linda Thomas-Greenfield, the Chairman of the House Foreign Affairs Committee, Gregory Meeks, and Congresswoman, Karen Bass amongst others who either worked, or have links in Africa. Maintaining his hopeful stance of a positive impact of the current US administration, he pointed out that the US Senate enacted the remarkable Resolution 684 despite the polarisation in US politics.

He emphasized that: “US Senate was able to come together in a bipartisan fashion to adopt this resolution on January 1, 2021. That we see promise within the US Senate, that they are not going to stop by this. That they are going to engage their bilateral partners, legislatures in other countries, they are going to think through transforming the resolution into a bill and into legislation that will have benchmarks, carrots and sticks to make sure that something could be done to bring an end to this senseless conflict” .

Calls for other parliaments to emulate the US According to Dr Fomunyoh, the example set by the US congress should be emulated by other European and world powers. Making the global appeal to elected officials and Members of Parliament across the world, the NDI official recognized that: “The way the US Senate has been seized to enact legislation and Resolution 684, I laud Hon Hoffmann for stepping forward and beginning to initiate some actions with the German Parliament that influence events not only within Germany but also the European Union and of course Prof Garry for her leadership in trying to instill accountability in bringing an end to the impunity that we now see in the conflict in Cameroon”. Challenges UN Security Council to ensure ceasefire Meanwhile, Dr. Fomunyoh, in his presentation, also challenged the Security Council to ensure that the ceasefire call by the UN Secretary-General following the outbreak of COVID-19 is respected and implemented in Cameroon. Highlighting the need to step up and speak out against the non-respect of the ceasefire call, he pointed out that: “We are aware that the UN Security Council, last year, adopted resolution 2532 which was a resolution that called for a global ceasefire because of COVID-19 and basically captures the statement issued by the UN Secretary-General himself”. “It is no doubt in anyone’s mind that Resolution 2532 was not respected in Cameroon because some of the worst atrocities that we saw in 2020 happened right at the peak of COVID-19, ” Dr Fomunyoh said, adding that: “As the world embraces the second wave of COVID-19 which is certainly going to hit Africa and Cameroon in particular, we have to realize that, that resolution was never implemented and if we do not affect an immediate ceasefire, the impact of this conflict is going to be aggravated by the second wave of COVID19”.

The urgency of UN fact-finding mission According to the NDI regional director for West and Central Africa, there is a need for a UN fact-finding mission to the restive regions in Cameroon which has seen several human rights violations and atrocities committed against unarmed civilian population. While calling on the United Nations to “facilitate and contribute to putting in place a delegation that can conduct a fact-finding mission” , he insisted that the United Nations Human Rights Council, may be the most appropriate vehicle for this. “They have the necessity being driven by the fact that we do not have the data that we need or updated information about this crisis because of the blackout on the international media. The impossibility that the international human rights organisations have to be able to access the country, let alone the conflict zones, confirms the fact that the conflict is underreported, ” he noted. “Everyone on this corps will remember that since 2019, the official figures of deaths in this conflict have stayed miraculously at 3,000 deaths whereas we know that people are being killed on a daily basis and that even since January 1, 2021 more than 60 people have already been killed in this crisis. Yet, at every official report that you see, there’s reference to 3,000 deaths, ” he regretted.

Putting the figures of children that have been deprived from education at 1.1 million, Fomunyoh opined that close to a million people have been internally displaced and 70,000 living in neighbouring Nigeria as refugees. Dr Fomunyoh emphasised that: “Data on this crisis is underreported and one thing that can give everybody around the globe viable information to work with, is a high-level fact-finding mission that will report its findings to the United Nations Security Council that can then be used to adopt resolutions to make sure that this conflict comes to an end and the atrocities and gross violations of human rights can also be brought to an end” .

Decries silence of UN agencies regarding atrocities committed The NDI official vented his frustration at the silence of some UN Agencies in Cameroon that have been silent on some of the atrocities committed on the population in the North West and South West regions. According to him, nothing justifies their silence when their voices are expected to be the loudest when horrible things that fall within the jurisdiction of various UN agencies are happening. “UNICEF, for example, when we talk about 1.1 million kids out of school, when we know that for five years, the kids who were 12, 13 years old are now becoming adults without a level of education that is going to help them in future, then we know that we are condemning the next or multiple generations of Englishspeaking Cameroonians, ” he told the participants of the Oxford University Conference. “UNICEF ought to be shouting on roof tops with regards to children caught up in the conflict.

The UN Women, we are hearing about young girls being exposed to prostitution and violence against women in the other regions where they now live as internally-displaced persons, detached and abandoned from their families and cannot be reunited because of the crisis.

UN Women should be out there bringing people to highlight the plights of women, children, and young girls as a result of this conflict, ” he recommended. “We have heard about the burning of health facilities. A hospital was burnt in Kumba last year or the year before. We have heard about armed groups or soldiers in uniform going into health facilities allegedly looking for members of armed groups, ” he stipulated. These, Dr Fomunyoh attested, are unacceptable, bridge of international laws, humanitarian laws, and should be highlighted by UN agencies in order to bring more credibility to the reporting of the ongoing conflict.