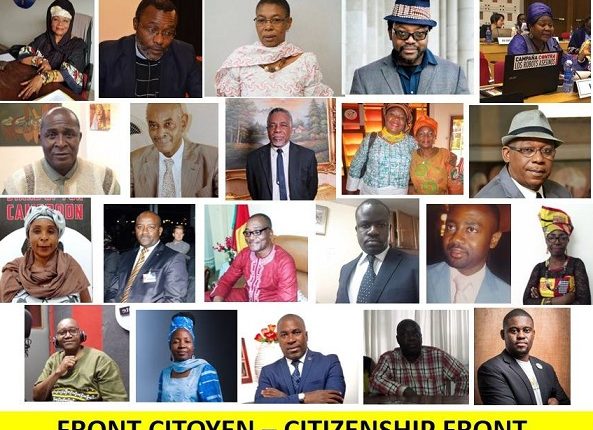 MESSAGE OF CAMEROON CIVIL SOCIETY TO THE INTERNATIONAL COMMUNITY

It is with great interest that the CITIZENSHIP FRONT, a platform bringing together civil society organizations and Opposition parties, has followed the various communications (i) of the United Nations Human Rights Commission, (ii) the European Union and (iii) the United States Assistant Secretary for African Affairs on the current political and social situation in Cameroon with regard to the respect for the rule of law and the human rights situation.

It is with satisfaction that the CITIZENSHIP FRONT notes the growing interest of the international community in Cameroon, particularly in condemning and denouncing cases of flagrant and repeated violations of the various international conventions and agreements duly ratified by Cameroon. Notably:
Resolution 21/16 of the United Nations Commission on Human Rights in 2012
Resolution 25/20 of the United Nations Commission on Human Rights in 2014
Resolution 5 (XI) 92 of the African Commission on Human and Peoples’ Rights
Guidelines of the African Commission on Human and People’s Rights adopted by the Member States in the section on Sanctions and Recourse 101
Despite the rhetoric on national sovereignty and “interference” which the Biya Regime will inevitably espouse to you the International Community, it is important that we, the CITIZENSHIP FRONT, as a center of enlightenment and defense of the fundamental rights of the Cameroonian people, express to you an objective analysis of the real situation of human rights and respect for the rule of law in Cameroon, while recalling the legitimate expectations of the Cameroonian people so that you can voice to the world the message of distress of a people living a real dictatorship behind closed doors.
The detrimental effects of several decades of predatory, random and clannish governance by Biya Regime are now measured by the exhibition of its multifaceted structural weaknesses, endangering the very survival of our country and our existence as a nation.
At a time when the international community is looking into the Cameroon case, the country is going through one of the most precarious periods of its history with a deteriorated security situation that affects almost 7 out of the 10 regions in the country:

In the East and in Adamawa, the country suffers from the repercussions of the political and social tensions from neighboring Central African Republic;
In the Far North, the country is still facing the Boko Haram insurgency, which has already caused at least 1,500 deaths and 245,725 internally displaced persons. Although the first attacks date from March 2014, the presence of the jihadist group in the Far North goes back at least to 2011. It relied on a network of local complicities and exploited the vulnerability factors shared by this region with Northeastern Nigeria.
In the English-speaking regions of North-West and South-West where 16% of the total population live, a political and social crisis has progressively led to insecurity and armed violence in the form of open conflict between the regular army and Ambazonian separatists’ groups who represent a real threat to territorial integrity. The results to date are extremely heavy to bear: 683,238 IDPs and 34,000 refugees in Nigeria.
In some localities of the Littoral and West regions, some incursions of unidentified armed gangs are reason to fear for the worst.
Faced with this extreme distress of the population, the Biya regime has responded with violence, repression, threats and the imprisonment of those who spoke up non-violently to denounce the catastrophic governance.
In the last three years, Cameroon has broken all records:
In leading the fight against Boko Haram, the government has improperly imprisoned hundreds of people. People who, for the most part, remain incarcerated till today. The rights of entire communities have been violated. Two videos showing the extrajudicial killings of dozens of Cameroonians by soldiers have left Cameroonians in disbelief and total uncertainty regarding their own safety and well-being.
Civil society members, journalists, politicians and ordinary citizens have been arrested in thousands. Civil society organizations and Opposition parties’ meetings have been routinely banned and interrupted by armed forces acting under the instruction of the administrative authorities.
Non-violent protesters have been fired upon by live ammunition and millions of people have been denied their right to information, as the internet had been cut off for months. The inevitable result has been the radicalization of certain segments of the population and the constitution over time of armed groups in English-speaking areas as mentioned above.
The presidential election of October 2018 was marked by violence before, during and after the voting. It was marred by fraud and irregularities, preventing Mr. Biya, declared elected by a controversial Constitutional Council, from enjoying any legitimacy.
Cameroonian citizens have paid the price of this violent response to all situations.

However, to succeed in determining their future against this violent and repressive regime, Cameroonians ask the international community to stand with the people of Cameroon and to enforce the various commitments made by the State of Cameroon.
In light of this, the CITIZENSHIP FRONT insists to the International Community that it is important at this stage to:
Strongly and very directly condemn violations of human rights and democratic principles
Demand the immediate release of all who have been illegally arrested and convicted in the Anglophone crisis and regarding the recent arrests of the CRM Coalition
Hold the Biya regime accountable at international meetings (the Cameroonian government representatives must be questioned usiing to the existing mechanisms zith regard to proven cases of murder, illegal imprisonment and torture);
Put into motion the process of individual sanctions against members of the Cameroonian government responsible for the current violence and chaos in the country. This includes travel bans, freezing of assets, seizure of property, etc.
In the coming days and months, it will be important for you as an international community, to stand up to the bullying and intimidation that are the regular tactics of the regime in place. Your calls for the respect of human rights and rule of law will be met with cries of “interference in issues of national sovereignty”. Do not be fooled!

Do not be fooled or cowered. Sovereign nations use their wealth to provide basic services to their people. Sovereign nations put the interests of their people above and beyond all else. Sovereign nations respect the fundamental rights of their citizens and uphold rule of law. Under the Biya Regime, Cameroon is not a sovereign nation. It is to restore our dignity and sovereignty as a nation, that we as civil society and opposition political parties are determined, despite the violence being unleashed against us, to fight for human rights, rule of law and fundamental freedoms in Cameroon.
In these crucial moments it is important that you as an international community stand firmly beside the Cameroonian people. No matter the inevitable verbal and media violence that is unleashed on you as individuals and as countries, it will be important to continue in the construction of the long-term relationship that binds the Cameroonian people and the international community on the firm foundation of human rights and the respect for fundamental liberties and freedoms.