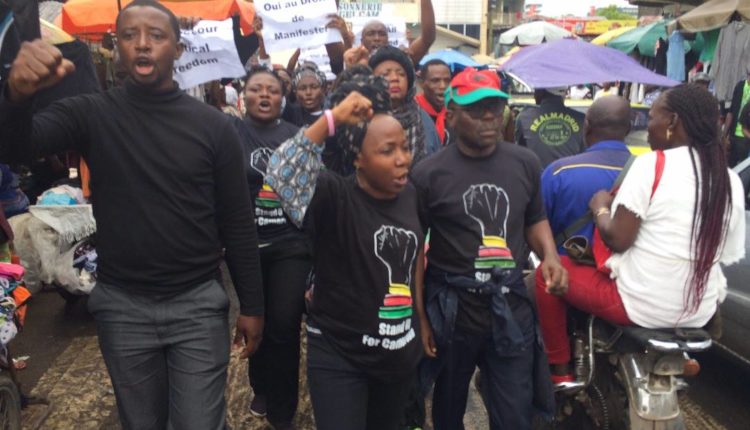 Kah Walla: The Biya Regime is killing us, as Cameroonians. We must stand together and bring an end to this madness!

LET’S ACT TOGETHER FOR JUSTICE AND LIBERTY !

The Biya Regime is intensifying its strategy of repression and violation of fundamental liberties against us as Cameroonian citizens and putting our common future in extreme peril. We must not let them.

In 2014, when we visited the Extreme North during the height of the Boko Haram attacks, the Cameroon People’s Party, along with a multitude of other actors, alerted this regime and the Cameroonian people to the fact that tactics of repression against the population as a whole, arrests of innocent people and violence against ordinary citizens were taking place and that these were counter-productive to the fight against Boko Haram.

The economic and social impacts of terrible governance for over 30 years which had enabled Boko Haram to take root in the first place were never addressed. The abuse of human rights by the armed forces continued and today we know that innocent Cameroonians were lined up and killed by this regime, including women and children. This combination of governance decisions by the Biya Regime, resulted in the radicalization of youth in the Extreme North and till today, Cameroonians in that part of the country, suffer from the attacks of Boko Haram.

In 2017, upon the arrest of the non-violent leaders of the Anglophone Movement and the cutting-off of the internet for the entire South West and North West regions, the CPP, along with a multitude of other actors, warned of the radicalization of the movement and the need to resolve this decades-old problem through concertation and dialogue. The government responded with continued acts of violence and repression.

Compounding the more than 50-year old bad governance which had led to the crisis in the first place. Today, there are a multitude of armed groups in these two regions. Civilians and soldiers are being killed daily. The socio-economic fabric of these two regions has been devasted to the point where it will take at least a decade to restore. The catastrophic governance decisions of the Biya Regime continue to demolish the lives of Cameroonians.

Lire aussi:   Fred Muvuny: It’s high time for the West to reconsider its relationship with Biya

After demonstrating on live television, the absurdity of the Cameroonian electoral process, the Biya Regime arrested on January 28, 2019, the CRM President, Maurice Kamto and party members who were attempting to carry out peaceful protests against the electoral results. The Biya Regime chose to shoot at unarmed protestors and two days later to carry out state-led kidnappings, they cannot be called arrests, because due process of the law was not followed.

Last night, after being refused access to their lawyers and family members for several days, CRM members were deferred to the Military Tribunal where at 11:00 p.m. they were charged and sent to Kondengui Principal Prison to await trial. Once again catastrophic decisions by the Biya Regime are endangering our nation. This renewed attempt to undermine fundamental political liberties and stifle all political speech which is not in accordance with the Regime is an extremely grave error at this time in our history. Cameroon is suffering from violent conflict in six out of ten of tis regions. The last thing our country needs is the radicalization of a legitimate and non-violent political movement.

The Cameroon People’s Party is thus appealing to all Cameroonians.

Every time we have divided our fight against this regime into factions of an Anglophone fight, an SDF, CRM or CPP fight, we have lost.

Every time we have allowed this regime into to divide us into Bamilekes, Bassas, Bulus, Northerners, or any other ethnicity, we have lost.

There is only one fight. To come together and bring an end to a regime that has brought untold violence, death, economic hardship and social strife to this beautiful, extraordinary country of ours, Cameroon.

We must fight for our country and for our future. We must fight without violence and with unprecedented determination.

We are not asking you to fight for an individual, for a political party or for a single cause. We are asking you to stand and fight for the principles that bind us together as a nation: justice, rule of law, respect for the uniqueness and diversity of our nation, economic prosperity and the peace that is built upon this foundation.

Practically speaking what should you do?

• Raise your voices on social media, in media, in private discussions for justice, for the respect of fundamental liberties, for an end to violence for all.

• Refuse to enter the politics of division that serves only this Regime. Anglophone against Francophone, CRM against SDF, Bamileke against Bulu. Cameroon is dying. The Biya Regime is killing it and killing us, as Cameroonians. We must stand together and bring an end to this madness!

• Refuse violence! No form of violence has ever solved a problem. No violence has ever brought a solution. Refuse to discuss or partake in any act of violence anywhere on our national territory. The Biya Regime is violent. Their violence has destroyed our lives. This is what we are fight against. We will do so without violence.

• Pick up your phone and call the CPP or Stand Up For Cameroon, contact us by email, WhatsApp, or Twitter. No we will not be discussing strategy on social media. We must meet organize, decide on common issues and on common action.

Long live justice and liberty for every Cameroonian.

Together we shall save the Nation!