Cameroon claims that Ambazonians joined them in 1961, a claim which cannot be proved. Even then, Ambazonians did not join them as individuals but as a nation. The two nations that are purported by
Cameroon to have joined must have the right to discuss the terms on which they are living together. But this is precisely what Cameroon rejects and claims that Ambazonians can only speak as individuals, while
LRC speaks as a nation!

Cameroon claims Ambazonians can never again speak as a nation! To enforce this view, Cameroon has systematically denied Ambazonians every single right that belongs to them as a people. Even as individuals, they have no right to question the illegal occupation of their territory by Cameroon. The systematic denial of these rights and the violent enforcement of assimilation is what makes it impossible for any co-existence to continue. I remind the reader that the African Commission On Human and Peoples’ Rights in its 2009 ruling in
Communication 266/2003 declared Ambazonians a People under the African Charter. 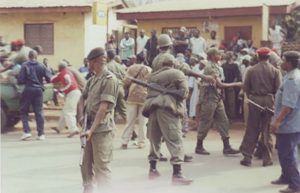