La Republique du Cameroun’s army chief of staff, General Rene Claude Meka visited Bamenda, in the northern part of Ambazonia on Wednesday April 11th 2018 to evaluate the state of the war against the people of Ambazonia declared months ago by absentee president Paul Biya. The war, which has been on since November 2017 has seen heavy casualties on both sides and resulted in over 100,000 civilians fleeing their homes to neighboring towns and neighboring countries like Nigeria in search for safety.

Speaking at the deserted and devastated battleground to soldiers currently militarizing the area, the elderly general blamed the soldiers for abusing the population they are supposed to be protecting. He instructed his commanders to be nice to the population so that the population can help them out in the war against the people of Ambazonia. 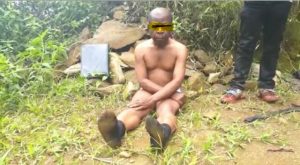 This declaration has been heavily criticized as a senseless declaration considering that the general is asking the soldiers to cooperate with the same people they are fighting. The same soldiers have been given full orders to shoot on sight and shoot to kill since January 2018, an order which has led to many villagers deserting their homes, hiding women and children in the forests and organizing themselves into self-defense groups. The same soldiers have adopted a scorched-earth military tactic for several months now in the process of which they have burnt many elderly villagers in their homes who were too old to run away like the younger ones. The same soldiers have looted hundreds of homes and made away with livestock, food, money, jewelry and other valuable items while destroying what couldn’t be carried away like motorbikes and vehicles. In short, the General asking these soldiers to cooperate with the population is like asking one to sleep with an enemy. It will take decades, if not a century to restore any kind of friendship between the population and the army in Ambazonia.

By acknowledging the need to work with the population and not against it, General Meka is doing too little and too late. The easy thing to do in order to win back the population would be to simply lay down arms and demilitarize the zone.

One doesn’t need a PhD in warfare in order to figure that out. Civilians will come back to their homes – if they have one to return to – if soldiers stop parading the streets in search for people to shoot. Gen. Meka is not ignorant. He knows the solution to the crisis but like his boss president Paul Biya, he prefers to fuel the war on and keep the crisis ongoing. It is the best and easiest strategy to ensure the extermination of the people of Ambazonia. If you see things from that angle, then his orders to his commanders to lure the population back into the villages make complete sense.

The same strategy is being put in place in other parts of Ambazonia like Manyu County where a meeting by colonial administrators is holding to find ways to ensnare the people who have managed to find safety in remote caves and forests.

They know that as long as the thousands of displaced Ambazonians stay alive in other places, eventually they will return someday to fight for their land. So the best strategy is to pretend to want them back home, entrap them then bundle them off into prisons in La Republique du Cameroun or kill straight away as the case is right now.

Unfortunately, citizens of Ambazonia have learned from experience never to trust anything related to La Republique du Cameroun, never again! And it shall not be business as usual General.