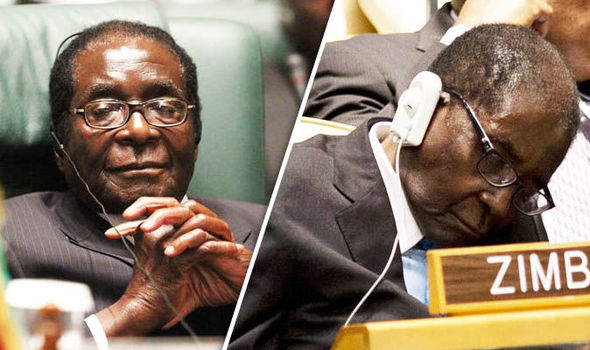 Robert Mugabe breaks down in tears

The frail 93-year-old has until noon local time on Monday to resign as President or impeachment proceedings will start, Zanu-PF said.

Mugabe was replaced by the vice- president he previously sacked, Emmerson “Crocodile” Mnangagwa, on Sunday after all ten Zimbabwean provinces passed no-confidence motions against the dictator two days earlier.

Although Mugabe technically remains President, the fact that he no longer leads his party means that the end is almost certainly in sight for his 37-year reign.

Ahead of his meeting with army officials to discuss his exit, Mugabe was “wailing profusely” and saying that he wished he could speak to his dead wife, Sally Mugabe, and his late son, Michael Nhamodzenyika, who died from cerebral malaria in 1966 at the age of three.

“He spends most of his time looking at an old photograph of Sally. It is terrible,” the aide said of Mugabe’s first wife, who died of kidney failure in 1992.

In 1996, Mugabe went on to marry his current wife, “Gucci” Grace, who was expelled on Sunday from her role as head of the Zanu-PF Women’s League “forever”.

The frail dictator has been staging a hunger strike over his confinement in house arrest and is refusing to take regular baths or speak, the aide added.

The only person who has managed to get through to him is the Catholic cleric Father Fidelis Mukonori, who is mediating between Mugabe and the generals, the aide added.

There is widespread speculation that Mugabe will officially resign late on Sunday after a crunch meeting with the head of Zimbabwe’s armed forces.

Lire aussi:   THE NAME "REFUGEE" IS DEGRADING IN ITSELF.

He has so far given little sign of capitulating, however, instead resisting the massive pressure from all sides by staging a hunger strike, making threats and refusing to speak at his Blue Roof home.

Mnangagwa within touching distance of the presidency, is only being delayed by Mugabe’s continued refusal to step down.
If he resigns, Mugabe could live as an “elder statesman” in Zimbabwe, or travel to a country where he has property, including South Africa, Dubai or Singapore.

While Mugabe has been removed from his role of Zanu-PF party leader, his title as Zimbabwean President remains.