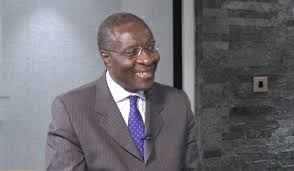 Dr Fomunyoh said the press in Cameroon is “helping to advocate for more open space for debate and dialogue, for working so hard to strengthen freedoms of the press and other liberties that are pillars of every democratic society” He assured the press men that they can always count on his support to make their “efforts worthwhile”

He used the event to clarify the press on the banning of a press event in Yaounde where he was due to participate as guest, his political ambitions and views on the current socio-political crisis in the Northwest and Southwest regions amongst others.
Dr. Fomunyoh said he was invited to take part in a two-hour long debate by the association of Cameroon Political Journalists to talk on issues of national and international interest. But to his dismay, the meeting was cancelled minutes to the meeting by the D.O for Yaoundé I. He later issued a press statement expressing his disapproval. In it, he strongly condemned the actions of the administration which he added can exacerbate public tension.

LISTEN: On this LINK: http://bamendaonline.net/dr-fomunyoh-hails-independent-press-promoting-liberties/

He denied allegations that the banning could have been linked to his ambition to run for presidency in 2018. Dr. Fomunyoh said he has not made any official statement as yet concerning that. “When I make up my mind on a critical issue of national interest I will very voluntarily let you know” he added

He also strongly denied accusations that he had links with the US government and the CIA. He was bitter about media accusations against his person by a certain Belgian national. He said all the information passed out by him are false and that he is being used because he his white to discredit him saying “he does not even qualify to work as my staff member”
Cameroon according to him is going through so many challenges at the moment like the Anglophone crisis, the war against Boko Haram, insecurity in the east to the border with Central Africa, the economy is not on a healthy path (loan agreement with IMF), state revenues are not meeting projected expectations , the country is polarized and there exist a huge generation gap. The country also has a restive population due to high levels of employment, the advert and exchange of idea by the youths and the external world is posing challenges to the government.
There also exist “multiple challenges with our constitutional frame work that is been questioned by many. With ideas that are being brought to the table, that need to be debated, digested  and some of them implemented to create a framework that would allow citizens to contribute to decisions that would impact their lives on daily basis” he continued.

To this Dr. Fomunyoh proposed a “younger generation of leadership” and people who can interact with Cameroonians across the board, with development partners and the international to help reconcile Cameroonians with each other.

He revisited his previous statements on the Anglophone crisis and insisted that he has been steadfast in his declarations since the crisis started in November urging the authorities to address the issues raised by the lawyers and teachers and for freedom of expression prevail. He wondered why it is difficult for Cameroonians in the 21st century to sit down and discuss on their future. 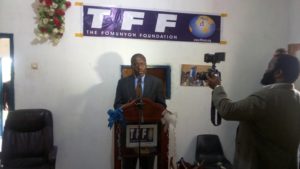 He concluded by calling on government to initiate sincere and genuine dialogue, take time to properly diagnose the problems affecting the country for possible solutions with all voices taken into account.
Earlier, Dr.Fomunyoh received a traditional gift from the family of Ndofor Mathias which included a carving depicting the impact of deforestation on the environment.  The event ended with a meeting of the Fomunyoh Foundation which is looking forward to opening two women empowerment centres in Kumba and Bamenda.